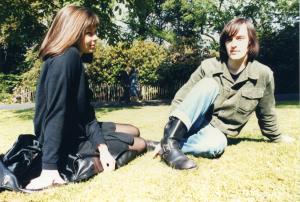 The Vaselines are a legendary Scottish pop/rock band made up of Frances McKee and Eugene Kelly. They are known for simple pop songs that could be both innocent and quite funny, often using double and triple entendres. The band was together from around 1986 to 1990 but had their popularity soared when their songs were covered by Nirvana (covers of “Molly’s Lips” and “Son of a Gun” appeared on Incesticide and “Jesus Wants Me for a Sunbeam” was performed at the famous “MTV Unplugged” performance).

The Vaselines reunited in 2008 and played their first-ever US shows last summer, culminating with a triumphant appearance at SP20, Sub Pop’s twentieth anniversary festival at Marymoor Park in Redmond. The label just released Enter the Vaselines, a two-disc (or three record) deluxe compilation of Vaselines material. It includes on one disc, The Way of The Vaselines: A Complete History – the album Sub Pop released in 1992 that combined the only two EPs and one LP that The Vaselines have released. The second disc includes several demos and live tracks.

The Vaselines are set to embark on their first US tour this week, including a stop at Neumo’s on Tuesday, May 12. Just before heading to the US, I caught up with the de-lovely Frances McKee by phone from her home in Scotland. We discussed Sub Pop, life before and after The Vaselines and their upcoming tour.

I recently read in an interview with (Vaselines co-founder) Eugene (Kelly) somewhere that there are a few new Vaselines songs you’re playing on this tour. Is that correct?

Yeah, we’ve been playing a couple on this tour. We’ve been writing some new stuff.

How do they differ from the previous Vaselines songs?

Well, those are Vaseline songs; they’re just about life, just little photographs of things that made us laugh or that happened to us or people we know, that kind of thing. Those songs aren’t that different in many ways. There’s still the element of the four years or so that we had. Those songs we’ve written so far, each are very different but there’s still the fact that they were written by us. I can’t say that (the older songs) are songs I wouldn’t write anymore, but they definitely have a slightly different view to them.

I always thought that a lot of The Vaselines songs were very funny. Do you still have the sense of humor when you’re writing new songs?

I hate to say it, but my sense of humor hasn’t really progressed. (laughs) But maybe our songwriting has. Hopefully.

Are you going to do anything with those songs, besides playing them live, like recording another Vaselines album?

I don’t know. We’ll just see where it takes us. Both of us are kind of busy doing this. We have enough songs to put together another record, hopefully. But we’ll see at the end of the year. We’d need to work a little bit faster than we do.

When The Vaselines played Sub Pop’s 20th Anniversary festival last year, you were supported by three members of Belle and Sebastian; do you have the same lineup with this tour?

The drummer we have now, Michael (McGaughrin) from The 1990s is drumming for us this time because Richard (Colburn) has gone on tour with Snow Patrol.

The new compilation that Sub Pop put out last week is gorgeous. I read somewhere that The Vaselines had control over the contents of the liner notes, Enter the Vaselines.

Whose idea was it to put out the compilation?

I think it came from Sub Pop because it was the 20th anniversary of (Dum-Dum, the only Vaselines LP). We discussed it and thought it was overdue because the copies that have been around, well, the sleeves are a bit cheap-looking, so we wanted to repackage it for people because not many people in America know about us, except for the photograph on the front cover. So this is just to give a little more than people had before.

How did the idea to reunite the band come about? Was it because you were asked by Sub Pop to play SP20?

Yeah, pretty much that and also at the same time we were asked to play a benefit show to raise money for an orphanage in Malawi, but the Sub Pop thing had come up at the same time. We thought we tell Sub Pop we’d come over and play it and it would show everyone such good fun that we thought “why not?” We didn’t think anyone would still be interested but they still were and we just went for it.

What kind of reactions did you get from those first US shows?

Overwhelming; really much more than I had anticipated. Everyone just really seemed so happy to see us play.

What kind of shows are you playing on this tour?

I don’t know, to be honest (laughs). I don’t know the places or the venues because I’ve never been to them before. We’re playing the Music Hall of Williamsburg in New York and Neumo’s in Seattle but that’s all I know. Bimbo’s in San Francisco as well.

How did The Vaselines form?

At the time, Eugene and I were a couple and we were thinking that there wasn’t a lot of good music in Glasgow at the time and not a lot of stuff was happening, so we were thinking we would start writing. Eugene was already in a band and I was already in a band and neither of us was particularly happy in the bands we were in, so we just thought we’d try a concept together and that was it.

The Vaselines were a band that people seemed to have noticed after you had already broken up.

Yeah, definitely. We were doing something distant. We didn’t understand what we were doing, we were just being ourselves but we didn’t work hard enough for the rock people.

Yeah, that’s right. By that time the band had gone our different ways. Eugene had started Captain America. I didn’t. I didn’t want to be involved in the music business anymore. I got really disillusioned by the whole thing. I spent some time as a teacher and gradually thought I wanted to do some stuff again. I had another band, The Painkillers, with James (Seenan), who was also in The Vaselines as the bass player. Then we had a band at the same time called Suckle. We had released a few records on Chemikal Underground Records and in 2006 I released my own solo record (called Sunny Moon) on Analogue Catalogue Records.

So even though The Vaselines hadn’t been going for a long time, Eugene and myself, we’ve stayed quite busy.

How did you decide to become a musician?

I didn’t actually. I think when I was in school I was really interested in acting. I did a little bit of acting as a teenager and I got a bit disillusioned with that and didn’t think that would be what I wanted to do. I always wanted to learn to play an instrument, but I never had, so when we started The Vaselines, I said I wanted to play guitar and all the Vaselines songs were written around the basic 3 chords I could play. That was the sound quality, I suppose. Basically, I picked up a guitar and tried to learn it. And I haven’t really progressed. (laughs)

One thing that I really love about The Vaselines is that each song sounds like it was just written a few moments ago, even if you’ve been them playing it for years.

That’s very good of you to say that because they’re very spontaneous and I think, I’ve been talking to people about this, people work on stuff for too long. I like that when I write a song, if it doesn’t come quickly, there’s no point. I usually think about it in my head for a long time and then write it as quickly as I can. I think if you work on it too long, it becomes a wee bit stale.

I want to mention this, a little over a week ago, I intervi
ewed a band in the dressing room at Neumo’s and after the interview they were debating with one another whether they should take one of the posters for Tuesday’s Vaselines show off the wall.

(laughs) I hope they stole one.