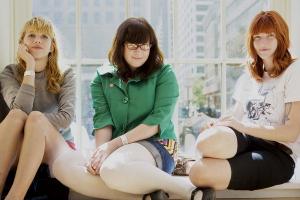 Vivian Girls are a lo-fi punk band from Brooklyn whose debut, self-titled album was a very solid and impressive album. The band has gotten a lot of attention in the blogosphere for the album and for their fun live shows. When I interviewed the band in their green room before their recent show at Neumo’s, they were running considerably late because they were filming a music video while they were in town.

When talking to Cassie Ramone, Ali Koehler and Kickball Katy, I found them very charming and funny – even with my patience wearing thin while waiting for them to get to the club. We talked about touring, the new album and playing the enormous Coachella festival.

I just read that you finished recording your second album. How is it going to differ from your previous, self-titled album?

Do you have a release date for it?

Cassie: In September it should be out.

Katy: It’s actually going to come out on the eighth because that’s a Tuesday.

Besides recording on analog, what else is different from the previous album?

Does it sound different?

Katy: Not entirely or dramatically different, but definitely an evolution.

Cassie: We progressed as musicians since we recorded the first album. We didn’t know much sounds or tones and were kind of winging it but this time we learned a few things along the way and I think it shows on the record.

Katy: We were definitely learning as we went along.

How was it playing Coachella this year?

Cassie: It was fun but really hot and a lot of people were there, so it was kind of scary. It was all so exhausting because it was at 1pm and it was so hot.

Ali: We played on a really good stage with Fucked Up and No Age and X…

Was it your biggest show yet?

Do you prefer playing festivals or smaller clubs?

Katy: Yeah, you meet a lot of cool people.

Was there anyone you met that are heroes or people you really wanted to meet?

Katy: And I met Alia Shawkat from “Arrested Development.”

Ali: I wanted to meet Morrissey but that didn’t happen.

Was there any show that you know of that led to the attention you had gotten since?

Cassie: I remember this one show at SXSW in 2008, when we played there. We played a day show behind a grocery store and only about twenty people were there and one of the guys who was working there said “you guys were great! Next year you’re going to be playing the big stages at SXSW” and we were like “shut up, that’s ridiculous.” And then…

Cassie: …And then a year later we were playing the big stages at SXSW.

What kind of music did you grow up with?

Cassie: I got started on the soft rock radio station when I was eight years old and then my friends made fun of me and I started listening to Z100 and then I really got into Sublime and Hole and Nirvana. That was in middle school and then in high school I li was into indie rock and emo and then I got into punk, which brings us today – but now it’s come full circle because I’m into soft rock again.

Ali: I think we all listened to alternative music and old music.

Katy: all sorts of stuff. My parents always liked music and had it on all the time in the house.

What was your favorite show you’ve played? Either recently or overall.

Cassie: My favorite show ever was when we played this crazy house party in Austin. It was at SXSW and people were crowd surfing and shit was off the chain. It was awesome.

Ali: Once we played in a crepe place in Santa Cruz and the food was really good and then the show was really good. People were going nuts and singing along, so it was really cool.

Cassie: I think the best shows are when people just go nuts. I always get psyched. When people are just standing there [we’re wondering] “I hope they like it”.

How much longer is this tour going to last?

Katy: About a month and a half?

I also wanted to ask you about your favorite after-work happy hour spots, but last time that happened you got in trouble for it.

Katy: Wait, what did we get in trouble for?

Ali: We were just being goofy and goofing around.

Cassie: People thought that we were talking down to them but really, we were just trying to be funny.