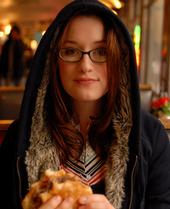 It’s no secret that the recording industry is in peril: Major labels are suing their best customers, releasing bullshit every day (or at least every Tuesday), abandoning stars that have made lots of money for them in the past, and utterly failing to grasp how to effectively use the internet.

If I was an executive at a major label, I would be completely terrified of Ingrid Michaelson. She’s a soft-spoken, nice, sweet singer-songwriter from New York who is only 28 years old. She’s become a sort of phenomenon online and on television with her songs appearing regularly on the show “Grey’s Anatomy” and in an Old Navy commercial. She’s selling out shows across the country weeks in advance (including this one at Nectar last Monday night) and is gaining fans every day. Her second album, Girls and Boys, is selling quite well. And she’s doing it without a label. I wouldn’t say she’s big with the indie crowds (a search of “Ingrid Michaelson” on Pitchfork turned up exactly zero entries) but “indie cred” is not something her fan base concerns themselves with anyway.

She probably will eventually sign with a major label and already employs a management team to help with landing her songs on television shows, but I still know of no other recent, unsigned artist to achieve such success so fast, doing what major labels are supposed to do, but without their help.

Shortly after the Nectar doors opened, it was already uncomfortably crowded. Uncomfortable would come to be an operative term for most of the night. It was difficult to find a place to see anywhere in the club and the time between the encore and proper end of her show was awkward to say the least. At times throughout the set she appeared to be exhausted from the constant touring but that didn’t affect her voice and it did not make her appear any less likeable.

Playing songs mostly from Girls and Boys, Michaelson sounded understated and lovely through Nectar’s PA system. Her first song, “Breakable,” immediately reminded me of Regina Spektor, and at other times she appeared to have been influenced by listening to Cole Porter musicals. Michaelson captivated the crowd for most of the night with her low-key, but often very pretty, singing and her clever stage banter. She sat down and played a keyboard throughout most of her 70 minute set, only joined by another young woman to play guitar and sing backing harmonies.

Michaelson got the biggest applause of the night when she played “The Way I Am,” which was featured in the aforementioned Old Navy ad; it is a simple but witty and catchy love song. With lines like “I’d buy you Rogaine when you start losing your hair,” it is a little offbeat but it is also very sweet.

On Monday night Nectar was filled up with her fans, most of whom were women who probably know her work from “Grey’s Anatomy.” She was very engaging with the crowd, interacting personally with one child who was, I believe, four years old and one woman in the balcony who was enjoying her being over twenty-one quite a bit.

When the night was over, I found myself quite satisfied. It was nice to see an artist find success by taking different path than most artists take, and to see someone likeable play to a packed crowd. Most importantly, though, the night was about listening to good songs sung beautifully by a promising singer/songwriter.