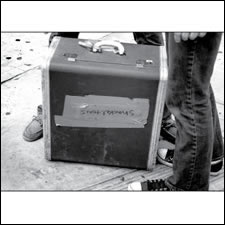 These are eleven modern love songs. The listener is placed on a ship at sea (there are several references to ships and sailing on the album), and taken on a rocking, bobbing journey through waves of desire, yearning and heartbreak. The opening song, "Your Movement," has perhaps the best and most telling lyric of the album: "We held it in our hands/and didn't know it was love." The music that accompanies each song isn't especially wistful or floating, but offers layers and a buildup of sometimes frenetic energy. It's the kind of music I would love to hear live. Besides the first song, the other stars of an altogether strong album are "Yellow Cadillac," "The Ship" and "Emergency."

I knew the album met my approval as I drove to work and found myself continuing to turn up the volume further and further until I could feel the whole car rattling and humming. The Shackeltons is a vibrant, textured, emotionally intelligent album. I don't know if my speakers will ever be the same.