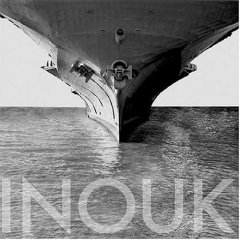 Inouk debut LP, No Danger is the soundtrack for reflective afternoons. The New York band's recent full-length release is a refreshing oddity. They pull from the worlds of jazz and folk to build melodies with dramatic guitar bends and gospel-tinged vocals. Because of this eclectic mix, the average indie-rock listener is challenged with the richness and sophistication of the songs.

One of the strongest tracks is "Search for the Bees." It has a trippy, almost monotone electric organ intro. A cymbal-heavy percussion is added under a comforting melodic bass rhythm which morphs into more of a groove. The gritty keyboards and drawn out guitar notes longingly slide into each other. The vocals shift from a harmonious echo to a hiccupping enunciation of the chorus. The pace of "No Danger" neither drags, nor demands your forthright attention. Instead, it saunters along as the music insidiously permeates the consciousness.

The songs are mildly experimental and easy on the ears until the record's last track. "Victory" breaks away with it's flat, punchy guitar melody and aggressive, almost howling vocals. The rousing finish is an unexpected, yes wholly appreciated finish to an album that expands the listener’s palate.