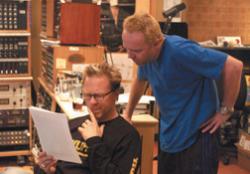 Metallica: Some Kind of Monster

"I'm madly in anger with you."

We begin with a few words from my imaginary younger brother:

"The main reason I was so into Metallica [in the mid-late '80s] was the music itself. I was just starting to play drums, and was taken aback when I first heard Lars Ulrich play. Mind you, sixteen years later his drumming is nothing special to me, but it seemed very unique at the time. The single act of purchasing the album "And Justice For All" marked the beginning of my rebellious adolescence; it was the complete soundtrack for my early teens.

"Somehow I could identify with what Metallica seemed to stand for. They were pissed, and I was pissed. [Lead singer] James Hetfield's lyrics questioned the same establishment that I was just beginning to question. Whenever I felt that nobody understood what I was going through, I could put on that album and suddenly realize that I wasn't alone.

"After AJFA, I was a fanatic. I bought everything in their catalog that was available at stores. I traded for rare EPs and tapes. I idolized Metallica, because they were uncompromising. In my mind, they were here to rid the world of the poseurs that were playing fluffy-haired cock rock.

"In 1991, Metallica released their self-titled 'black album'. I could see that this was the beginning of the end. The music was dumbed down for the masses and had a 'slick' production quality. The lyrics sounded more bubblegum than political. There were still good tracks on this album, but Metallica had lost a lot of credibility in my eyes.

"What made me absolutely hate Metallica was the Napster lawsuit [in 2000-2001]. My former idol, Lars, seemed to be the ringleader, but they all seemed to have become corporate and greedy — totally the opposite of what they stood for in their early years. Cutting their hair and shedding the metal image was just the icing on the cake."

Well I've never been a Metallica fan, but Keith's adamant former devotion provides me a certain familiarity with the band's members. Especially drummer Lars (above, right), who as a performer always seemed in a perpetual state of having a seizure while constipated.

More than a decade has passed since Keith lost interest in the group, but having recently seen the new documentary Metallica: Some Kind of Monster I can tell you that little has changed with Mr. Ulrich's fitful, flailing style. The film covers the tribulation-addled 2001-2003 production of the band's latest album, St. Anger — but this isn't your typical rock doc, and a pastiche of inevitable Behind the Music goings-on ultimately serves as backdrop for a surprisingly complex study of relationships over the two tumultuous years. Directors Joe Berlinger and Bruce Sinofsky (Brother's Keeper, Paradise Lost) have crafted an absorbing non-fiction journey involving a passionate, flawed group of fortysomething family men who just happen to be the top North American concert draw of the past ten years.

Along with hyperactive Ulrich and ever-ferocious Hetfield, there's the unruly-haired guitarist Kirk Hammett (he resembles a bad drag Latoya Jackson in some scenes) and, late in the film, a new bassist whose name I won't divulge — being clueless enhanced my enjoyment of the selection process. (If you're dying to know, click here.) The movie's 140-minute runtime is peppered with footage of $40,000-a-month "performance enhancement sessions" with noted coach/therapist Phil Towle; he actually encourages the guys to develop a mission statement, practice positive affirmations, and communicate with "I feel…" and "What I'm hearing is…".

Expletives are shouted, tears are shed, and the resulting interpersonal conflicts are delicious to behold, seguing to truly intriguing glimpses of the members' personal lives. Lars, for example, is an avid art collector — with decent taste, I should add — and a multimillion-dollar Christie's auction of some of his Basquiat paintings is unexpected and compelling. (Check out Lars' judgmental, Danish, Rip Van Winkle-lookin' old mountain-man pop. He is a hoot.) James' accumulated boredom with his life and his work is manifested in penchants for bear-hunting, expensive motorcycles, and substance abuse. And interwoven archival footage demonstrates how Kirk's sweet, zenlike simplicity has remained intact over the years — he seems to have strayed least.

Also appearing are aptly-named longtime Metallica producer and acting bassist Bob Rock (giving unintentional props to Martha Stewart by sporting her hairstyle throughout the movie), bitter ousted guitarist (and current Megadeth member) Dave Mustaine, and former bassist Jason Newsted (who I remember thinking was kinda hot back in the day). Even the filmmakers turn up in one crucial scene, making Metallica: Some Kind of Monster its own mesmerizing subject.

Anything to add, Keith?

"I still feel betrayed, but I'll continue to listen to Metallica's early stuff. Mostly in mp3 format on my PC."