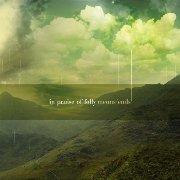 Sexy, smart, hard, and catchy. Those are the adjectives for my favorite bands. There has to be an intelligent, sensual dynamic tension involved, that kids back in the late forties called rock and roll. The trio In Praise Of Folly has that energy in today's context, and conspicuously peak out past the pack of bands with similar use of opening and mid-song pianissimos, sweet strings over odd time signatures, blazing post-hardcore fortissississimo fake fade-outs, and abrupt melding between tracks.

In Praise Of Folly make their loud and intricate experimentation seem utterly sincere on Means/Ends, their second full-length since 2001's introductory EP The Friends With Benefits. The beauty of the band's overgrown Skagit Valley upbringing can be heard through this magnum opus.

The band has a complex sound without a hint of false ambition or condescension to the more noise-appreciative semi-mainstream. Influences seem to range from the melancholy-confessional — such as Tim Kasher and Cursive on the achingly hypnotic "Beliefs Otherwise" and the honestly just aching "Affluenza" (the latter one of the more conventional but still electric songs the band has ever recorded) — to almost glam-punk a la Be Bop Deluxe on the squealing-lead-guitar-laced "Misplaced." (The latter song is a brave and most appreciated genre-leap for the band.)

In Praise Of Folly has three sonorous guitarists, Matthew Dammer, Peter Verdoes, and Benjamin Verdoes, the last fellow also handling drums and vocals. Does that listing make the vocals seem like an afterthought, which is often the case with textural art-punk metal? Banish the thought. Means/Ends features Verdoes' truly exceptional song-speak-warble style throughout, an emotional thing somehow fragile and contemplative in the middle of these rattling grandiose arias. Somehow, he can powerfully play the drums simultaneously while handling the spiritual and mendacious drama of the ontologically-based lyrics.

The story of the band is a complicated one, as complicated as their own song imagery, with a variety of collaborators and commercial valleys and peaks. But the band has gained a massive following by keen radio programmers and by playing out with fellow Lujo mates Suffering & the Hideous Thieves, as well as The Decemberists, Rocky Votolato, Aveo, and many other quality live acts. The important thing is that with Means/Ends, In Praise Of Folly has captured the dually intoxicating and clandestine feeling of their music from clubs into a next-level album that will be noticed far beyond their adoring Seattle fan base. Couldn't happen to a nicer and more talented bunch of guys.