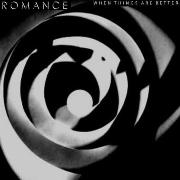 When Things Are Better

Bringing the sense of danger and rock adrenaline back to dark dance music, Romance sounds a little like other neo-post-punk bands jamming up the alternatives airwaves, but their audio lineage has more to do with the doom-stricken underbelly of UK club music. An obvious example would be Sisters of Mercy, as lead vocalist Drew Jackson apparently grew up on a steady diet of Andrew Eldritch and the fierce playing of his band, with David Blake on versatile guitar, Michael Ribagin on bass, and Jake Witt sounding like a marching army of drummers. Romance follows SOM's lead by actually rocking this genre, and not going art-fag or disco. (Indeed, the album ends on the ferocious protest song, the funky "Don't Go Disco.") The difference is, Romance combines the psychedelic fluidity of early SOM and other early punk/Goth bands with the intensity of current hard-edged indie rock.

The opening track, "Paris Is Burning" is reminiscent vocally and lyrically of the Ruts' classic punk track "Babylon Is Burning," and from there, the Byzantine ambiguities of the soul and the decay of urban living are set in motion through the next seven tracks. It's neat to hear a band that could be making straight dance music OR ferocious rock and roll bringing a downer to happy grooves, with Blake getting very mordantly-early Echo & the Bunnymen on some tracks, layering everything with sheens of near-psychedelic flow and crunch. The eight tracks have the same propulsion as a lot of Franz Ferdinand wanna-bes without ever touching upon a derivative Gang of Four style in either tempo or musicianship.

As torturous and hypnotic as the grooves get, on a song like "Automatique," the band has no shame in showing a deep love for Clash-style riffs and splashes, crossing a couple of boundaries with no fear. Erik Blood's engineering makes the thing sound like a face-melting rock album, no matter how locked-in-the-groove things get. "Automatique" is probably the best song here, because its tempo oscillates more unreservedly between fills and riffs, and Jackson's dramatic vocals chanting, "Can't you see what they are doing to you?" are as venomous as anything Killing Joke ever recorded on their first three albums.

If Jackson could vary the tone and the band slow down the tempo occasionally through the rest of their material, I'm sure they could come up with either a This Corrision or a What's THIS For …! — maybe both at the same time. They certainly have the playing and passion to do so.