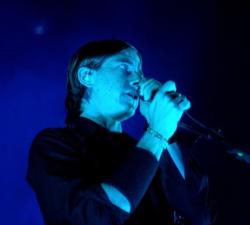 Before the Interpol show even took place, I was a little peeved. The universe was throwing in my face the fact that I’d purchased pre-sale tix, full-price, thinking surely they’d sell out and I’d be grateful to have them. Not so. It seemed everywhere I went, I heard offers for half-price – or even free – tickets. On my company’s ticket exchange list. On the radio as I struggled to wake up. Heck, even on TIG (congrats to the winners, though!).

What made this all the more frustrating was that I felt privileged to have received the pre-sale info and access. With my advance purchase of Our Love to Admire {review} through iTunes, I was granted a “special pre-sale code” to buy advance tickets to the Seattle show. This seemed like a great bonus in addition to getting the album, so I anted up. But after seeing this plethora of available tix, I was wondering why I even bothered.

Fortunately, Interpol made it worth my while. Their set – not much more than an hour, but deeply spanning their three records – was stellar as always. This was my fifth time seeing the band, and each show has progressively gotten bigger. Surely nothing will ever replicate the first mesmerizing time I saw the band at Graceland (now El Corazon). That was one of those magic moments, truly the best show I’ve ever seen. Anything since that time will always be inevitably compared against that show and fall short. At each show since that first, the crowds have gotten larger, and I’ve had to stand further and further from the stage. I’ll always rather see a not-so-big band in a small venue rather than a mega-band in an arena, so I was feeling apprehensive about this show. But the band has a great way of pulling the crowd in, making it feel like an intimate gig no matter how far the physical distance from the musicians themselves.

Interpol have toured almost incessantly since Turn On The Bright Lights’ release, and it shows. Their sets are solid, amazingly tight. Tonight’s Wamu Theatre show was no exception. I’m not sure now how it’s even possible that the four-piece band – also touring with a keyboardist – was able to fit so much material into such little time. I guess it’s the lack of chit-chat or any pause between songs. What’s striking about Interpol is their songs sound just like they do on record – a tough feat in my mind, as those records are near perfection. Between a few songs were short thankyous and hints of “transition” material – perhaps new songs, or short, impromptu jams. Leading into encore-closer “PDA,” the band dabbled into a bit of a reggae jam (which was really odd and out of place). But other than that, they played straightforward from the albums.

I was pleasantly surprised that the band delved so far into their back catalog. They opened with “Pioneer to the Falls” off the latest, and ended with “PDA” off the debut. In betwixt was “Say Hello to the Angels,” “Take You on Cruise,” “Not Even Jail,” and so much more. The newer material fell a bit flat in places, though particularly great were “Pioneer” and “Rest My Chemistry.” The encore even included “Stella Was a Diver and She Was Always Down” – which makes this girl immensely happy.

This was my first time in the Wamu Theatre for a show. I see this venue during every home Seahawks game, and I couldn’t imagine that a cement-floored open warehouse would actually sound all that good. It was surprisingly better than anticipated. Not superb, as the sound fell pretty flat as it lifted into the exposed industrial ceilings and over the non-raked floor. But they made the most of it. My guy speculated that Interpol travels with their own sound tech, which might explain why they always sound pristine, even in awkward acoustical settings.

After a night of windstorms, frustration over the ticket situation, and general wariness about attending this show, I’m really glad I went. Interpol rally strong, and they were certainly able to bring me out of my funk and remind me exactly why I love seeing live music.