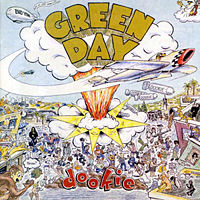 "In the End" by Green Day

It's either funny or pretty predictable that a large number of my high-school punk-rock memories involve truancy of some form or another. Maybe I just took that Skip Off School to See the Damned album title to heart a little too much.

One of the first discussions I ever had about punk rock and major-label politics was in the spring of '94, when, as a high school senior bored to tears with the educational process, I skipped out of newspaper class with another punk-rock aficionado and took a long (and probably boisterous) lunch at the nearest Burger King. There, huddled over greasy, ketchup-smeared hamburger wrappers we argued about whether or not Billy Joe and the boys had "sold out" in their move from Lookout! to Reprise. At the time, it was still a revolutionary thought that a band we'd listened to off a tiny punk imprint could suddenly be a part of a major label and performing like crazy on the radio. My friend argued they'd turned their backs on their roots or something ridiculously misguided but lovingly idealistic that only a 18-year-old punker could say. I argued that Dookie was as solid as anything we'd heard before. It was sometime this afternoon that it hit me that being a music fan was, sadly, about a lot more than just the music. On the way back to school, I made a silent promise that I'd never let myself turn into one of those train-spotters who's more wrapped up in the scene than the music.

Whenever I dust off Dookie it sounds, even 14 years later, pretty darn good. And tracks like "In the End," a scorcher full of clattering tempos, smoking, buzz-saw guitars and those gooey melodic bass lines that underpinned the band's pop-punk sensibilities. Racing through a bitter condemnation of a former flame, it's all piss and vinegar and Buzzcocks-inspired melodies until it burns itself out in under two minutes. It's pop punk from the days when the style was still proud of its confrontational roots in the underground. It might be one of the last few pop-punk tracks created before the post-Dookie world changed everything, leaving the genre's commercial success hanging over everyone's heads and ambitions — and the flood of crap pop punk out of the Pandora's box Green Day opened.

I guess if I was any sort of cool-assed hipster, I'd insert a lawyer-approved paragraph in small type exonerating myself for having Dookie on my iPod. Or at least have some excuse handy for you. I don't. One isn't needed. I dig Green Day, and that's enough reason for me, so long as I'm honoring that promise I made to myself a long, long time ago.