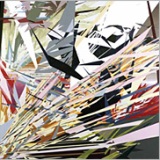 In an ever-converging world of art, music and video (see the video iPod), bands producing the multimedia experience of sound are become more common and many times with mixed results. It can be difficult to balance quality of all the sides with the artistic vision of all the media involved, otherwise one branch can be starved by attention to its other limbs. Invisible are Portland's self-described "Film Video Audio Band Group" which sums up the amorphous world in which they exist. Like New York's Lansing-Dreiden, Invisible is meant to be a comprehensive experience of visuals and sound and in that experience, the music has the potential to fall to the wayside, but luckily on Invisible, this collective has created melodic soundscapes that can survive on their own.

Invisible can best be classified with Broken Social Scene, American Analog Set and Manitoba/Caribou, straddling the margins of atmospheric and low key music with auditory experimentation. The songs are crafted from quiet and drifting melodies with hushed vocals intertwined with the textured instrumentation. Sometimes the songs have a mainstream structure reminiscent of the nomadic sound of Sea Ray, such as "Not the Next Anything", when the strings duel with guitar and piano. "Maybe We're Still Running" has a charming xylophone line accompanying the saccharine vocals. Some tracks, like "Ears Up to Our Chests," gain more momentum, moving them above the subdued mood of most of the disc. "Brighter Rays/God Damn Your Energy" fuses Built to Spill and Modest Mouse into a montage of both melody and dissonance.

Invisible creates a sonic landscape that experiments with the boundaries, bringing mesmerizing and lush backdrops to their project. However, like watching a movie on mute, you feel like you're missing part of the venture. It probably doesn't do Invisible justice to review it merely as an audio experience, but with any multimedia undertaking, if one part can survive beyond the limits of its artistic brethren, then you know you're onto something. Invisible are one of the clear-cut leaders in merging media forms into something uniquely new.