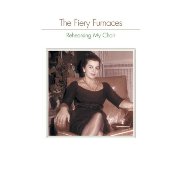 Typically, when promotional material for an album uses the phrase "as much musical theatre as concept album," I get the screaming heebie-geebies. My mind conjures up visions of Spinal Tap's Stonehenge or Styx's Mr. Roboto. In other words: horrifically overblown and ostentatious clap-trap. This worry became doubly so when the above phrase is included with the material for the uber-prolific sibling indie duo The Fiery Furnaces.

I might have been one of the few indie rock souls who did not trip head-over-heels for their last album, Blueberry Boat. To me, the Fiery Furnaces have always seemed like the marching band nerds to the White Stripes punk rock slackers in the great Rock and Roll High School. Luckily, although the Furnaces' new album Rehearsing My Choir dances along the edge of the pretentiousness vortex, they reigns it in enough to make it strangely compelling.

Rehearsing My Choir is an odd experiment. Matt and Eleanor Friedberger of The Fiery Furnaces try to capture an oral history of their grandmother, Olga Sarantos, through a series of song/vignettes set in the 1920's through the 1990's using Olga as the lyricist and vocalist. However, as a musical experience, there is something slightly discordant to the whole affair. That being said, Rehearsing My Choir is still quite a sonic encounter with memory and confronting the past, present and future.

The opener, "The Garfield El" sets the tone for the album, with Olga frantically proclaiming, "Faster hammers! Faster hammers! Churn and turn into my late train to my lost love!" over frenetic a piano line. Oddly, the second track is unrelated to the overall story-arc of the album. Instead, "The Wayward Daughter" is a segue into electro-synth "Ladytron meets Stereolab" pop song and is by far the most accessible song on the album with playful exchange of vocals between Olga and her granddaughter Eleanor.

"We Wrote Letters Everyday" is a rather touching but bitter remembrance of lost love and youth. "I wonder how long they lasted?" Olga laments about letters left in the basement to waste away. However, the tone changes halfway through as Olga describes her wedding with eight priests proceeding over it and the song finally degenerates into a conflict of notes. "Forty-eight Twenty-three Twenty-second Street" sounds as if it belongs in a long lost Stephen Sondheim musical, breaking into a samba halfway through the song. This lack of a unified song structure is repeated frequently during the course of Choir and tends to distract more than add to the overall experience. The middle of Rehearsing My Choir magnifies this trend and is bogged down in atonal adventures that fail to keep your attention. Eleanor and Matthew seem to get so absorbed in recollection that they forget to create memorable tunes to go along with it. Luckily, "Slavin' Away" saves the middle of the album (minus the ill-advised synth solo at the end) is a warm number with guitars and piano that use the interplay of Eleanor, Matthew and Olga's vocals most effectively. The closing "Does It Remind You of When?" is set in the 1990's and Olga laments listen to this tune I'm playing for you now kids/Does it seem sad/Does it remind you of when? with Eleanor echoing I know in my bones it isn't fair and we're all reminded lyrically and musically how time slips away.

One of the most difficult aspects of Rehearsing My Choir are Olga's vocals. Although the vocals add authenticity to the reminiscent nature of the album, they can also be distracting, similar to Calvin Johnson's role in the Halo Benders. Olga can sound very endearing, but she also has a muppet-like quality that is unintentionally reinforced by the mischievous melodies that the Fiery Furnaces love. Yet this may be the point of album: let Olga take control rather than use her as an affectation to the Fiery Furnaces musical aspirations. Rehearsing My Choir is not for everyone. Heck, its not for many people at all, but if you've enjoyed previous Fiery Furnaces forays and if you have an interest in oral histories, Choir is a fascinating sojourn into a life in the 20th century. With more musical direction and focus, Rehearsing My Choir could have been an significant piece of American musical history. Instead, it becomes a footnote in the rock timeline.