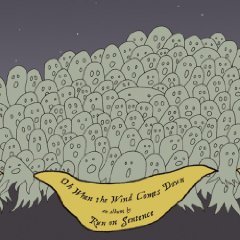 Oh When The Wind Comes Down

Run On Sentence poet-entertainer Dustin Hamman knows his way with an American tune, as deep as a bog and as fetching as the knee of a flapper in the 20s. Able to ease into a timeless ontological wane whilst waxing nostalgic about being "Foreign and Awkward," in here and "The Afterlife" (parts one and two), he and his musical cohorts (starting off with William Joersz on double bass, that big stand up hollow kind, and John Vecchiarelli on drums, but expanding quantitatively from there with the additions of accordion and exotic horn textures) craft anthems of anomie from no particular era, but perhaps an alternate dimension we all remember from silent films and scratchy soundtracks.

There is nothing scratchy at all though about the clear, lush sound provided by Portland, OR producer Nick Jaina and engineer Lee Howard. Oh When The Wind Comes Down has a sonorous delicacy–its lo-fi punk and Simon Joyner-inspired swagger taps into the under-stream of the nation's musical consciousness.

This is the midwest of the psyche that will caress the listener's mind as it lovingly draws blood in perfect chamber hickeys like "Carrie Pt. 2" and seasonal favorite "November Nights."