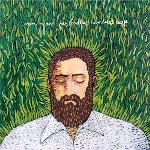 I want your flowers like babies want God's love."
-From the song "Fever Dream" by Iron and Wine

Iron and Wine is one of those "bands" that consists pretty much of just one person, that being in this case Sam Beam, a film professor in Miami. He has a new album out called Our Endless Numbered Days on Sub Pop, and not only is it a fantastically solid summer-chill record, but the artwork is really cool.

But while it is undoubtedly a solid record, Beam's pretty much divided his fans with this release. His previous records, The Creek Drank the Cradle and The Sea and the Rhythm EP both came from the same living room sessions that naturally had a gloomy 8-track hiss sound to the background. With OEND, Beam headed to Engine Studios and producer Brian Deck in Chicago to do the new record the "right" way.

While some will argue that the cleaner and crisper studio sound eliminates the implied intimacy provided by the lo-fi recordings, others will find the switch a welcome one. Beam hasn't changed writing styles much, the songs are all pretty much in the same vein as the those on his previous records, so really the only change is that you can hear the squeak of fingers on guitar strings better.

somewhere in the back of their minds. Beam's whisperings on the same subjects, however, are more direct and my extension more heartfelt. When he's coming up with lines like, Tracks like "Naked as we Came" and "Love and Some Verses" carry this record out from the rubble of the average acoustic singer/songwriters who whisper about love and death whilst an aromatic candle burns between pictures of Nick Drake and Jeff Buckley"I lay smiling like our sleeping children/ one of us will die inside these arms/ eyes wide open, naked as we came/ one will spread our ashes around the yard," we have no fear of Hallmark knocking on his door anytime soon. I don't know how well a line like, "May I be weaved in your hair?" would do on a Mothers' Day card anyway.

That brings us pretty much to the tenth track on OEND, a song called "Fever Dream." And I confess to you, dear reader, that I am physically, emotionally, brutally, honestly, whole-heartedly, confusedly and blankedly obsessed with it. Upon reading that, I suspect some of you may be thinking something like this:

"I've read your columns and reviews before jerk-nose. I know you get all weird with 100-word sentences and words like 'blankedly,' (which I am pretty sure isn't even a real word anyway) when you talk about these bands I've never even heard of. Just tell me if the record sounds more like Matchbox Twenty or Outkast and I'll know what you mean."

If in fact you were thinking that, then apparently I am a psychic. Please contact me either by telephone or just by yelling really loudly in a westerly direction if that was really what you were thinking. Once you get a hold of me we can further discuss our future as money-making fat cats in the psychic hotline industry. Until then, I am going to continue on about this song which has so fixedly captured my emotions.

"Fever Dream" has few lyrics, but it needs few because the acoustic guitar line is so damned beautiful that when I played it for the first time in my headphones, my heart actually stopped so that it's noisy pumping would not distract it from feeling the utter loveliness of the song.

Leading up to the falsetto simile given at the beginning of this review, Beam does his best late-night-pillow-talking-voice to sing, "Sometimes I'll hear when she's sleeping / her fever dream / a language on her face" — enter Beam's falsetto and his wife's female harmonies for the orgasmic moment of ideal love, when we get to hear what the language on her face says:

"I want your flowers like babies want God's love."

Maybe I just like simile and metaphor, and that's why this kills me. But even listening to the song on repeat now outside a bookstore's pseudo-café in Williamsburg, VA on a Monday afternoon, I want to cry. I am convinced this song is a tear-inducing window to something good behind the wind that is making the leafy-green trees in the parking lot sway like rowboats on my grandmother's lake beneath Mt. Rainier. It makes me see what seemed at first to be imperfections in the shape of the gray clouds to really be perfections of gray. "Is it possible that every cloud I have ever seen up until now has been wrong, and this is right?" It makes me notice how I am breathing, how a toddler boy admires the height of his mother as he holds her hand crossing the parking lot, how the beautiful girl on the sidewalk's arms swing a little bit differently than the ways of other girls, or how that little pink lump in a stroller might someday become the first woman president, and I would never know I could have met her just now.

An old man with a walker just moved past me and smiled with his eyes at my stacks of paperbacks and other studying paraphernalia. He was wearing a hat that labeled him as an ex-Navy Seal. Now he needs a walker to make it from Food Lion to the pharmacy, but his smile was one of pure kindness in his old age — the smile of someone who is happy with where they are, the smile everyone wants to have. The same smile of a warm-smelling grandfather as he whittles you a statue out of wood with a pocketknife, the smile I probably have right now as I listen to the record again, struggling not to skip straight to track ten.