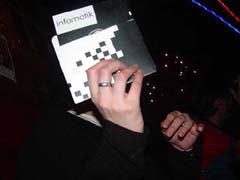 If you were alive and coherent during the 80s, you remember wearing pointy shoes, ripped shirts, lots of make up and big, geometric hair. The early 80s purged itself of the bled over punk and disco movements, allowing synthy new wave to emerge, rearing its big-haired head.

Local electro-synth trio, Infomatik has tapped into that energy. With bits of Stranglers, OMD, New Order, and even a tad of 'Eighties' Killing Joke, Infomatik has actualized an authentic sounding, and worthy homage to that self-absorbed decade. Their 4-song demo could overdub any 80s-era John Hughes movie, save for those ridiculously obnoxious Home Alone flicks.

From the rapid-fire tse-tse-tse-tse of the cymbals on the morose 'Inside a Moment' to the sliding deep and grainy synth on 'Sleeping Pill', Infomatik's debut is an awesome 15-minute flashback. My guess is this isn't necessarily a nod of adulation, rather a processing and interpretation of early influences on their young, moldable minds. Or maybe they just discovered synthesizers in college and thought they sounded cool.

One other thing to note is Infomatik's obvious marketing savvy. Not only are they canny musicians, but clever packaging strategists as well. Americans, like crows hypnotized by all things shiny, are total suckers for clever packaging. The band MUST be hip to the phenomenon, or else they would not have decided to put out their demo housed in 5" floppy disks with a paper sleeve. It's fucking brilliant! I highly recommend picking up a EP at one of their shows before they run out — if they haven't already.