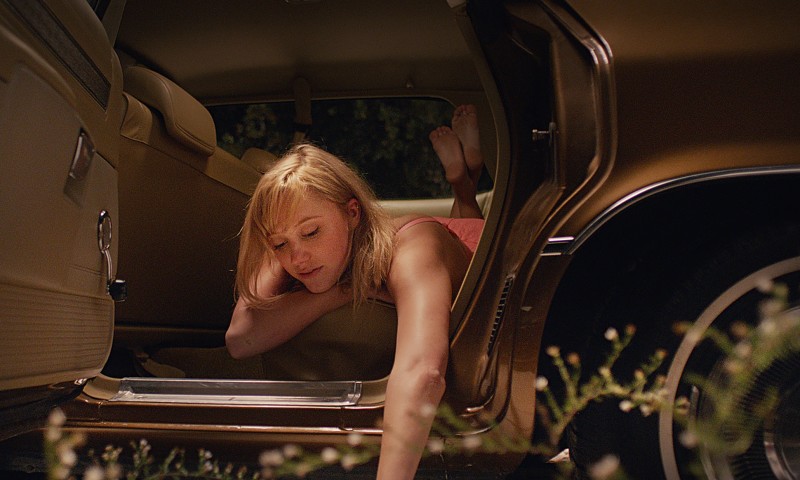 Imagine going on a date with someone you really, really like, enjoying a romantic lakeside talk, cozying up in the car for some hot sex—then having that person drag you out into the middle of nowhere, tie you to a chair, and explain that by having sex they’ve infected you with something that will FOLLOW you. And you have to keep running from it, because it won’t stop until it catches up to you and kills you.

After her dream date turned nightmare, Jay (Maika Monroe) struggles to make sense of what happened, and while she’s recovering she starts to see things no one else can: an old woman shuffling towards her in school, a threatening tall man banging on her bedroom door, someone who looks lot like her friend trailing behind her—IT is following her, and it will get her unless she passes it on to someone else … although even that doesn’t mean she’ll be safe forever.

Jay’s sister and friends gather close and try to help her, though there’s not much you can do to protect someone from a relentless killer who’s only visible to the people infected and doesn’t follow any of the typical genre rules. Even after tracking down the boy who cursed her, they learn little more than, “Have sex with someone else to pass it on” and  “Don’t let it touch you.” I don’t think I’ve ever seen a horror film use the death by sex trope in such an effective, creepy way.

Director David Robert Mitchell fills each second of this film with heavy atmosphere. It’s one of those movies where every frame is a piece of art, the kind of movie that you wish you could freeze and pluck still images from to hang on your wall. And that soundtrack! A Tangerine Dream/John Carpenter-esque mash-up straight from the 80s. {You better believe I pre-ordered it on soon as I got home.}

On top of all that goodness, Monroe’s ability to carry every emotion just under the surface and break down at the exact right moment is INSANE; Keir Gilchrist (one of my favorite actors from The United States of Tara) kills it as Paul, her long-ignored admirer; and the rest of the supporting cast heightens the feeling that this story is taking place for reals; they just all work together so, so, so, so well. Hell, EVERTHING does.

You know I love me some horror that concentrates on creating a seriously frightening plot and haunting imagery but doesn’t over explain anything—and that’s just what IT FOLLOWS is. IT is crisp and exciting; IT is modern and classic; IT is fucking gorgeous and my absolute favorite thing right now.

IT is following me, and I can’t wait to see it again.