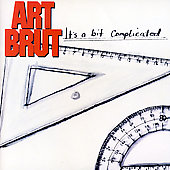 It's a Bit Complicated

There's currently a divide – a schism let’s say – in the world of physics. Between the world of Einstein’s relativity based on a steady, Euclidean geometry to the universe based on his work with gravity and the Neils Bohr’s quantum mechanics that postulates a world of uncertainty at the atomic level, there is a gap with no bridge. What works in relativity and what works in quantum mechanics cannot work together – they are too different with the constant behavior of Einstein’s equations versus the crazed behavior of particles in atoms. How can these two disparate theories of physics – both equally viable in their own right – be brought together into a unifying theory to explain the nature of the universe? Art Brut, that’s how. It’s a Bit Complicated is the unifying theory that has been missing for all these years – it, at the same time, is as constant as a calm lake surface and as frantic as a pile of bunny rabbits on speed – and this dichotomous existence will not only bring our universe into clearer focus, but will also make you want to dance your socks off, in a completely scientific way that is.

Alright, maybe I should calm down some. I’m not trying to say that It’s a Bit Complicated is the ultimate bee’s knees, but it is quite good and gives you exactly what you might expect from Eddie Argos and the band. It rocks, plain and simple. I think the best way to look at Art Brut is as the missing link between pop music and punk – taking the mentality of punk and fusing it like some sort of musical Cyberman with the sweetness of pop music where you’re concerned about music, girls, and being cool. “Pump Up the Volume” is the perfect example – it covers important themes like making out and pop songs and poor Ol’ Eddie is confused about whether he should feel bad when he longs to crank his music when he’s kissing his lady (”I know I shouldn’t/Is it so wrong?/To break from your kiss/To turn up a pop song?”) – and in itself, it might be that pop song that Eddie wants to hear to badly. Art Brut has no fear of just playing a rock song like “St. Pauli,” although I have no idea what Eddie is singing most of the time on the song. However, they can also be soft(ish) and gentle – albeit in Eddie’s ridiculous way. Just take a listen to “People in Love,” almost an anti-love song, where Eddie admits “To every girl who’s ever been with me, I’ve got over you all… eventually. See, he’s just a sweetheart in the end!

Art Brut keeps the hits on coming and just like I mentioned with all this physics mumbo-jumbo, “Direct Hit” is both exactly what you expect from Art Brut, but has a frantic energy that keeps your atoms moving – all done in one fell swoop. The same might be said for “I Will Survive,” an odd economic statement on the general status of Eddie’s monetary standing (”I don’t know what I’m doing, but it’s feeling like success”). This continues into “Post Soothing Out,” a nice little rock ballad that more or less tells the tale of who Eddie’s lady needs to keep her job so he can rock out with the band. “Late Sunday Evening” is features a horn section in this Clash-inspired song that almost lets a 70’s ballad break out in the middle, it is a surprising move for the band but works like a charm. Sometimes Eddie lets his self-conscious side through, like on “Jealous Guy” where he doesn’t want to let his lady go to sleep because he’s worrying that he’s not keeping her up as late as her ex – all the neuroses of being a rocker.

The consistency of Art Brut’s themes is remarkable – “Blame It On the Trains” seems to tackle important issues like sleeping in and missing the trains, although would you have ever expected Eddie to work “duvet” into an Art Brut song? If you’re still searching for the next “Emily Kane” on It’s a Bit Complicated, well, you might be out of luck because “Emily Kane” is a once-in-a-band’s-lifetime song, but “Nag Nag Nag Nag Nag” might be the pop gem that keeps the Art Brut nation growing – in wraps up the music-centric lifestyle that the band embraces in a lovely pita of raucous guitars. Eddie is struggling with what to do with his life and for all of those who disparage the musical integrity of Art Brut, Eddie is a great lyricist, chiming in with gems like Is it the sound of a man wrestling with emotion?/Or sound of him losing and causing a commotion?. “Nag Nag Nag Nag Nag” is the ultimate “I don’t want to grow up” song for everyone having a quarter-life crisis.

So, how does this all actually bridge the gap between Einstein and Bohr? As I see it, the only thing that really holds Art Brut back is the predictability of the band; Art Brut can be proven to rock with an R-squared value of 0.999 and every time you change the equation, you can still be sure that you will be able to predict the amount they will rock. For some bands, that might be a bore, but the boundless energy and lyrical gymnastics of Eddie Argos gives the band that needed uncertainty – he’s like a human electron, you know he’s there but you’re not quite sure when or where he might pop up – and it is exactly that notion that keeps the band interesting. It’s a Bit Complicated is your record to rock to at all hours and all times, safe in the knowledge that they have conquered the divide and continue to bring us the unifying theory that nothing is better than a good pop song.