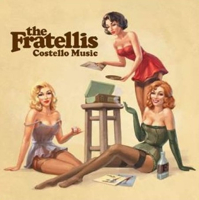 "Baby Fratelli" by the Fratellis

There is something unsettling about this 4th of July fireworks thing – you know, how many times do people gather en masse in the dark in this country? Not too often in this day and age, but you know, Americans love freedom, so it happens, once a year, eh? You'd think it was a holiday. I was struck by the fact that many towns in middle America seem to like to celebrate the 4th with mediocre cover bands, which is too bad. Where are all the rock bands on the 4th? Not playing the Davis, California 4th of July party, I'll tell you that much. What this has to do with the Fratellis (beyond their general absence from Davis on the 4th and by the way aren't American and probably hate freedom), I'm not too sure other than the fact that the Fratellis album is sort of like sonic fireworks, exploding here and there like bottle rockets fired by the drunken louts behind us at the park. Certain bands are very good at packing a lot of energy into their songs and the Fratellis are one of them.

I discovered today that modern fireworks more or less look like a ball of gunpowder and the diameter of the charge is somehow related to how high the firework goes off, so I guess "Baby Fratelli" would have a pretty large diameter because it rocks your socks off like a rabid weasel (I originally typed "rapid weasel", which might be equally disturbing). And if my mixed metaphors are right, then what I've suddenly compared the Fratellis to is an incendiary, multi-colored mammal with a penchant for stealing footware. If that is not the best compliment that can be bestowed on a band, I don't know what is. However, more likely this is a sign maybe I should just be quiet and finish enjoying the song – you should do the same.