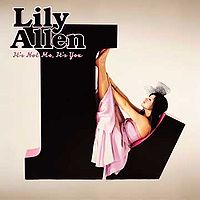 In the United States,we like our celebrities to be perfect so we can revel in their flaws when they cease to be. The Olympic champion Michael Phelps achieved a perfect eight Gold Medals at the Beijing Olympics this past summer but the moralist echo chamber went into fast effect when he was photographed smoking marijuana at a party and lost sponsorship deals from Kellogg. How many discussions have you heard (or taken part in) regarding how fit a parent Britney Spears is? I bet it happens far more often than discussions as to how good her last two albums, Blackout or Circus, are (very and pretty, in that order).

What makes Britney’s Blackout album and, her British equivalent, Lily Allen’s It’s Not Me, It’s You albums so compelling is that they are pop stars cognizant of the bubble they live in and written from that perspective. We may not be able to live the life of a pop star, but those two albums give a glimpse into the life of one. Allen is not on the same leash that Britney is and she finds herself in the headlines for her lifestyle. She had gotten pregnant (and subsequently miscarried), had a television show that was quickly dropped and it was noted at least two awards ceremonies that she had too much (free) alcohol and embarrassed herself. In her early twenties and coming off the success of a hit first album (2006’s Alright, Still, Allen makes for good tabloid fodder.

It’s now early 2009 and Allen’s sophomore album, It’s Not Me, It’s You, is an early contender for album of the year. She may be a magnet for tabloids because she’s young, beautiful and has (had?) a hard-partying lifestyle, but she is also very intelligent and no contemporary pop star (ok, maybe Justin Timberlake) has a comparable grasp for what makes a hit song than Allen does.

This album’s recording was made in the public eye, with Allen immediately releasing demos and rough mixes of songs to her MySpace page or other spots on the internet. A track called “I Don’t Know” was an earlier incarnation of “The Fear” (the first single) and “Guess Who Batman” became “Fuck You”, etc. Yet everything she released left one with the impression that It’s Not Me, It’s You will be a very, very good pop record. She posted another fantastic track, “Who'd Have Known”, but said she left it off the final version of the record because she didn’t want to waste the time getting a sample cleared, but it did eventually appear on the final version of the record.

It’s Not Me, It’s You opens with “Everyone’s At It”, a pop song about the hypocrisy of the culture she lives in. The song slowly builds up into a thoughtful (and sometimes funny) critique of the culture we live in. When she sings “so your daughter is depressed, let’s get her straight on Prozac; little do you know she already takes crack”, the best pop star in the world gets the last laugh.

“The Fear” is the second song and lead single. It mocks the image that Allen is supposed to have as the troubled pop star. “I want to be rich and have lots of money; I don’t care about clever, I don’t care about funny,” she sings in the opening verse and later reconciles “it don’t matter because I’m packing plastic, that’s what makes my life so fucking fantastic.”

Produced by Greg Kurstin, the album has a much more contemporary sound than the ska-inflected pop of her debut album, Still, Alright, which is sort of ironic because Kurstin’s own band, The Bird and the Bee, used a much more nostalgic pop sound on their latest album, Ray Guns are not just the Future. Here, Kurstin co-wrote most of the songs with Allen and found a consistent sound whose melodies fit very well with Allen’s lyrics and harmonies.

“Fuck You” is a screed against George Bush, who presided as a president of the very slim majority (very large minority?) that elected him. She mocks the issues with his father but it has catchy hooks that fit with the song well. It was released online during a time when Bush was still president and makes light of his homophobia. Fortunately, Allen gets the last laugh because Bush is unemployed in the (bear) economy his presidency created.

Even when she deals with subjects beyond her (i.e., God and the afterlife), her pop instincts guide her through the songs about her relationship with her God. It probably is not a coincidence that Allen’s “Him” and Kanye West’s “Jesus Walks” are the most interesting songs about faith (to me, an admitted atheist) about individual faith because they are written by two individuals aware of their imperfections (ok, Kanye may not be) and grapple with that in song, while not forgetting the knack for a catchy hook that sounds instinctive.

It’s Not Me, It’s You is not a completely perfect album (“Back to the Start” is sung way too fast for its hook to take effect, for example), but it is the final result is of a very gifted pop star who is aware of the price that comes with fame but still wants to live a life she is comfortable with. Lily Allen has the wisdom of an industry veteran because they hype machine tried to swallow her whole, but she is she is still way too smart to let that happen – or at least go down without a fight. It’s Not Me, It’s You is that fight.