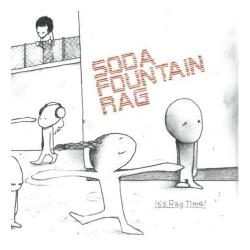 The name "Soda Fountain Rag", the self-titled release from this Norwegian pop band, perhaps inadvertently indicates quite a bit about the content of the album. The soda fountain is a symbol of a more "innocent" time in American history, but followed by the word rag, the name takes on a dirtier connotation. That’s what this record is all about: innocence marred by anger, negativity and depression.

The album is essentially about childhood, as made evident by the playful, sometimes sing-songy melodies. However, songwriter Ragnhild Jordahl chose the darkest moments of childhood to write about. Tracks such as, "The Saddest Boy in Town", "Angry Girl" and "Go!" are filled with bitter lyrics sung to paradoxically sweet tunes. These songs recall some of the worst thoughts that almost everyone had at some point growing up. In the deceptively catchy "Go!", the chorus reads, "Go! Play in the traffic! You know you can’t win, nobody likes you the way that you’ve been, and if you try to call I will not answer the phone, everyone I know hopes you die alone!"

Musically, Jordahl is very talented, but I think this may be a case where she should seek a partner in her project. Her voice is congested and oddly pitched, and it goes out of tune just enough to be less than endearing. Her melodies are unique and catchy, but on occasion an unexpected note will either make the song more interesting, or more often just be distracting. If the band were to get a different singer, I think the CD would be more enjoyable, but this comes from someone who won’t listen to Bright Eyes because I hate Conor Oberst’s voice.

It is not uncommon for pop albums to get a little edge by incorporating darker lyrics, but this album went a little too far. Not only were the words angry, but they were underdeveloped and simple. Often they would run awkwardly into the next verse, creating run-on sentences that did not fit the music particularly well. In a way this reflects the theme of childhood, but that may be a stretch I made up as a senior in high school English.

In the end, this CD did not leave me feeling good, and I personally like to feel good after listening to music. I felt even worse when I caught myself singing "Go! Play in the traffic!". At their best, Soda Fountain Rag can sound like Ladytron. At their worst they can sound like a preteen scenester boy with a keyboard, GarageBand and a lot of free time. With just a few adjustments I think they could be a great band, so I would keep an ear out for their next release and see if some of the negativity has worn off.