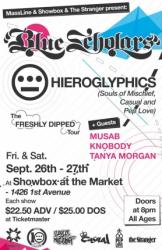 Blue Scholars' homecoming at the Showbox

Friday night marked the first proper Seattle show for Blue Scholars after their successful five-night stand curating and headlining The Program late last year. From the moment I walked into the Showbox, it was obvious that this duo of DJ Sabzi and MC Geologic, who spent most of 2008 on tour were sorely missed. The large club was nearly full by 8:30pm, with a long queue of people desperate to buy tickets to the sold-out show (the first of two in a row).

I’m trying to stay clear of hyperbole, but this show was a triumph by any measure. I don’t review too many hip hop shows (although still probably more than any other writer here), but when I do, they are definitely the most enjoyable to attend and review. The crowds have always been large and energetic. One of the openers this night, an MC from Oakland calling himself Knobody, said from the stage that he always loves playing shows in Seattle because the crowds show a lot of love to the opening acts as well. That’s a big contrast with a lot of indie rock shows. Along with Knobody, there were two other opening acts before the co-headliners of Blue Scholars and Hieroglyphics. They were Tanya Morgan and Musab. They all played short, 20-30 minute sets and all were well-received by the Showbox crowd. Even with so many acts, the night ran pretty smoothly and only fell behind schedule by about 10 minutes towards the end of the night.

Sabzi and Geologic came out around 11:25pm to close the night and the place was ready for them. The Showbox was completely packed by that time.

When you listen to Blue Scholars, if you hear the stories Geologic tells, they are politically aware and deal with the consequences of free-market capitalism. Before the economic crisis we’re facing right now, Geologic rhymed about people displaced from their homes in South Seattle because of the demand for “growth” (“progress revolves around economy and I can see the consequences of capital firsthand; monorail construction pushed the tenants off the land”). With “Back Home”, Geo tells us about the soldiers in Iraq, who are largely from poor, urban areas. When they played that song, I immediately thought of the debate I had watched just a few hours earlier and how Sen. John McCain was one of the biggest proponents of the war from the its inception. His criticisms of the war were not because of whether or not it should have been fought but how aggressively it was waged. The chorus, which every in the Showbox knew and sang along to, goes “Bring ‘em back home, for my brothers and my sisters who have been gone too long, I don’t want to have to keep on singing this song.” The point was made to the 1200+ people there.

Blue Scholars don’t separate their political awareness from their music – and all of the best songs in their catalogue tell the stories you won’t hear on the news or read in newspapers. That they are able to tell those tales through their music (and especially over Sabzi’s excellent beats) makes them both politically and artistically successful.

This, though, was a show and everyone present was there to have a great time – and they did. This setup was minimal, it was just Geologic and Sabzi this night, and they weren’t backed by a funky jazz band, like when I saw them at The Program last year. There was a cameo from Thig Natural of The Physics, who gave us a verse on “North by Northwest”, but it was mostly Sabzi’s beats and Geologic’s rhymes for the night. I couldn’t see anyone who didn’t have their hands in the air during that song.

At one point during the night, Geo said they were getting tired of rhyming over the melodies from a Modest Mouse song (“Float On”) so for one song, Geologic rhymed over the music to MGMT’s “Kids”.

Overall, the show the show was a huge triumph. Blue Scholars gave an excellent show to a hometown crowd that missed them dearly since the last Seattle club show, over nine months ago. In a very real sense, Geologic and Sabzi are hometown heroes and this night they got the homecoming reception they so rightly deserved.