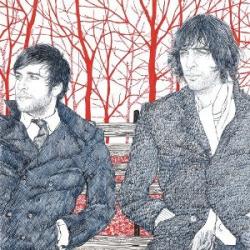 This Is Ivy League

Armed with this knowledge, I hardly expected that Alex Suarez and Ryland Blackinton would deliver an indie-pop/folk record with song titles like "Love Is Impossible" and "Don't Waste Your Love On Me."  Guess I should've read their Myspace profile, which lists Simon & Garfunkel, Nick Drake, Belle and Sebastian, and the Beach Boys as part of the band's handful of influences.

And sure enough, Ivy League is a lesson in 60s pop, moving briskly from the folk harmonies of "Modern World" — the vocal delivery and enunciation almost completely mimicking that of Paul Simon — to the tambourine-laden jangle of "Visions of Tokyo."  When the band chimes in after the first 10 seconds you'll be left wondering whether Suarez and Blackinton tied Brian Wilson up in the basement and stole his microphone.

The only issues I have with the album are that some of the songs are so catchy that they border on saccharine ("Love Is Impossible"), and there's an odd 1 minute and 51 second interlude halfway through that sounds completely misplaced.

But all that aside, and besides the fact that the bands wears its influences on its sleeve, this is a pretty cool summer release.  File it right alongside Little Name's How To Swim And Live and just about any Belle & Sebastian record, and you'll have yourself a nice indie-pop feast.