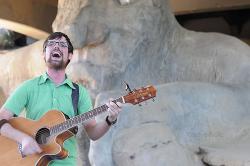 Fishboy at the Fremont Troll

Eric Michener of Fishboy plays a free acoustic set at the Fremont Troll in Seattle. He was supposed to playing with D.Crane of BOAT as well but D.Crane cancelled. Cristina Bautista aka and friends filled in – tap dancing and all – kind of how i would imagined Tilly and Wall would do if they did an acoustic set but a more in a wholesome simple way.

While most of the crowd sat and stood further back while Connecticut Four was playing, Eric was more upfront and stood closer to the crowd. He asked the crowd to sit on top of the troll and he would play facing them. No one budged but he told people to feel free to take pictures of him and walk around the troll while playing. He was joined by his trumpet and percussion player Adam "Sweatpants" who at point jumped off the troll onto the dusty ground.

Eric played to the delight of fans, passerbys, tourists, kids and parents in the neighbourhood. His last song "Proper Name Spelling Bee" was requested by a young kid in the crowd. This song capped it all. Great audience participation in this one as there's a part of the song where everyone yells out:

Up with your hands!

Fishboy would later play that night at the Sunset Tavern. He FLEW in from Denton, TX just to play this special show – with Boat and Tullycraft.