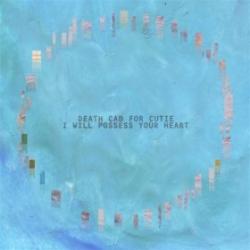 "I Will Possess Your Heart" (Single)

Since the release of Transatlanticism, Seattle's pride and joy, Death Cab For Cutie, has continuously released singles that only slightly represent the band’s overall abilities.

"The Sound of Settling" was a shameless (albeit catchy) pop tune, and "Title & Registration" hit airwaves in an altered state; it’s original form getting tucked away on the song’s three-track single. Moving on to Plans, the band released “I’ll Follow You into the Dark,” a stripped-down love ballad more appropriate for Ben Gibbard’s Home EP than anything else. Let’s not forget “Crooked Teeth,” chock full of guitar and bass solos, emphasized choruses, and an overall shallowness in comparison to the band’s former albums.

The single’s introduction begins similar to Wilco’s “Heavy Metal Drummer” with someone fiddling on the piano as the song begins its takeoff; it's an appropriate comparison given the band’s sink-or-swim approach with their newfound ventures into experimental material, vaguely paralleling Yankee Hotel Foxtrot’s mentality.

As the song continues, a dominant bass line lays the foundation as simple piano notes are hammered. The band conjures up past memories of “We Laugh Indoors” while inviting “Summer Skin” along for the ride. They also find some room for the Can influences they can’t stop talking about. By the time the song reaches its first verse, it’s taken an appropriate shape but a shape that could’ve been formed in a little over two minutes, rather than four and a half.

As the song calms down to give attention to Ben Gibbard’s latest lyrical offerings, we find the singer in the position of an omniscient stalker, fixated on relentlessly obtaining a girl’s love. In doing so, Gibbard finds himself writing his most simplistic lyrics to date. The bridge is where the band finds themselves sounding more like the genuine Death Cab we haven’t heard in years: built up instrumentals, raised nasally vocals, and heartbreaking lyrics.

Overall, the single comes off as just another pop song wrapped up in the gimmick of a jam session. Its heavy reliance on suavely sung choruses is fit for the radio, but not for the band’s original style. Death Cab For Cutie means well, but they seem to be caught in a limbo between creating pop-structured tracks and finding the overall sound they seem to have lost once they hit the big leagues.