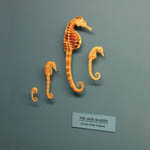 Curse of the Tuatara

Members of San Diego's The Jade Shader cull elements of their varied musical backgrounds to create an energetic and emotive debut EP, Curse of the Tuatara. The anguished, guitar-driven flavor of lead singer Terrin Durfey's former band Boilermaker is evident, as is the pop-tinged poignancy of guitarist Chris Prescott's band No Knife. Prescott is also a veteran of Rocket from the Crypt, which manifests itself in The Jade Shader's affection for low grooves and punk dissonance. Drummer Matt Lynot's resume includes touring with Michael Andrews, perhaps best known for composing the Donnie Darko score. These experiences and influences converge to create a strong undercurrent of vitriolic intensity that is countered by up-tempo melodies, playful jazz ambience and intricate vocals.

"Eraser" relies on nursery rhyme structure and a heavy bass line as it weaves through phases of sparse instrumentation and escalating punk guitars to craft an ominous and hypnotic story. "Buzz Genie" fits a similar sonic mode, with a heightened focus on introspection and despondency. A journey of restlessness, regret, fear, and flight comes to life amidst layers of Rhodes piano and guitar riffs. "Space Goat" combines the pulsating frenzy of early-era Dischord bands with the catchy pop-punk hooks to deliver palpable anger, power chords and touches of screamo. "Scallywags" focuses on the travails of pirate life, one of the band's favorite themes. Lush, jazz-infused melodies and delicate beats belie the tune's tale of mutiny and murder.