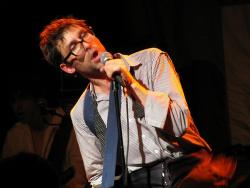 Jamie Lidell at the Showbox at the Market

Jamie Lidell’s show at the Showbox on Saturday night started off really slow.

He came out just before 11pm and was twirling an umbrella with a spiral design on it and opened with “Where D’You Go?” (from JIM, his latest album). I can’t help but laugh out loud at a comment on Line Out that asked “what is he, The Riddler?” and after a few songs one of my friends asked if we were at I Heart Shiva (the popular Bollywood dance night at the Baltic Room) after someone of his Eastern influences become prevalent.

This is apropos of nothing (but makes for an amusing story to tell). I went to the bar before Lidell’s set and I was in a line with a bunch of frat dudes (backwards baseball hats, drowning in cologne) on one side and the women who love them on the other. One dude (no ball cap) was running back and forth between the lines and says to the women “let’s rendezvous after the show and I’m bringing this guy [me, as I was the only non-fratastic person in line at that point]”. I thought two things: what a douche bag (I swear I’m trying to retire that term from my vocabulary) and maybe the majority of voters did not make a mistake in naming Jordin Sparks as the sixth American Idol.

All that aside, though, the show started to really pick up around three songs into the set. He really started getting interesting with “What Is It This Time” but started getting exciting after about half a dozen songs. At first it was confusing. I was in the bar, thinking I had a pretty good view, when Lidell’s band left the stage and he was alone onstage. He was beatboxing and spinning some records. If you were walking in at that moment you would have thought “what in the hell is this?” Then I moved closer out of curiosity and watched what he was doing and found it was brilliant. It looked like he was screwing around with a synthesizer, drum machine and microphone (and maybe he was) but watching him was fascinating. Sometimes he’d make a bunch of different sounds and loop them back while crafting other unique sounds. This went on for about half an hour and never became boring. Maybe it was because Jamie Lidell was obviously the coolest person in the room and could get away with something like that. In the middle of the encore he said that earlier in the day he decided this show was going to be experimental because “you’re Seattle, you can take it”.

Lidell is like a soulful, British crooner living in a digital world. He’s also got style and charisma to burn. He even looked cool during the time he was strolling on stage with an umbrella (‘ella, ‘ella, ella) looking like Gene Kelly gliding across the stage. If Jim wasn’t an overall disappointment (although his first album, Multiply, was and is fantastic) I could probably be accused of having a guy crush on him. And I suspect I’m not the only one.

Lidell’s set lasted about 95 minutes and he was accompanied by a 4-piece band. They mostly (but not exclusively) played drums, keys, saxophone and guitar. After a few dull minutes at first, Lidell’s larger than life personality took over. By mixing his magnetic persona and impressive talent as a musician, he captivated most of the room. Depending on gender and/or orientation, I’d be willing to bet most people at the Showbox were wishing they could either be Jamie Lidell or with him.

This is Jamie Lidell’s world. We just get to live in it. 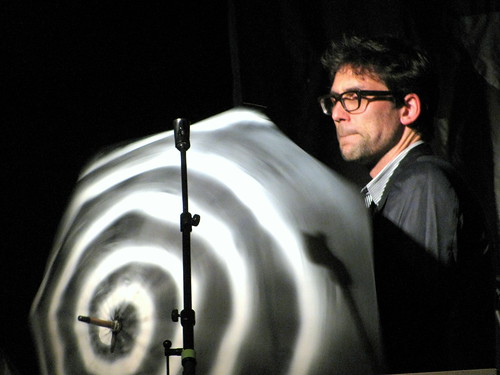