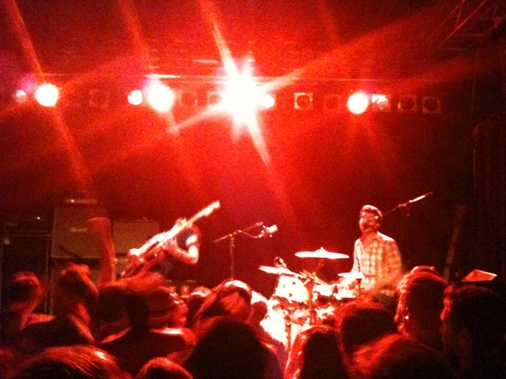 I went into Japandroids show Monday night fully expecting it to be a loud, liquor-fueled, sweaty mess — and even with my expectations set so high, their show somehow managed to be even louder, sweatier, and more liquor fueled than I had expected.

Cadence Weapon got the crowd all warmed up with his electro/techno backed brand of hip-hop. The project of Edmonton native Rollie Pemberton, Cadence Weapon's delivery is sharp and witty, full of pop culture references and clever word play. His rhymes land somewhere along the lines of Das Racist, but with a bit more energy and bite. His beats are heavily influenced by electronic and techno music, with Pemberton himself citing Basement Jaxx, Aphex Twin, and Daft Punk as heavy influences. He even cleverly sampled fellow Canadian indie-electro artist Grimes' track "Eight" for his song "88."

Cadence Weapon spent his first few songs trying to win the semi-confused and skeptical crowd over. This was a rock crowd after all; here to see a loud, blistering rock show. Possibly sensing the crowd's reservations, Pemberton took a minute to explain the few similarities between Cadence Weapon and Japandroids; both groups sport two members, and both hail from Canada. Despite the crowd's initial hesitence, they wisely came around and got into his smart and unique brand of hip hop. By the time Cadence Weapon sang his 2012 track "Loft Party", the crowd was right there chanting along with him.

Vancouver B.C. duo Japandroids then took the stage full of energy, with guitarist and lead singer Brian King warming up by shredding through a few guitar riffs, then excitedly bantering with the audience like a man who downed a couple energy drinks backstage before the show. They blasted through the lead track "The Boys are Leaving Town" off their 2009 debut Post Nothing, then with a feeling of satisfaction stated "Well that was a good warm up." They then deliberately turned the energy up a notch, calling out to the Neumos' sound man "Crank this shit Louis, let's do it!" They then spent the next hour and a half blasting through songs that were louder than any show I've ever seen at Neumos. It was if their mission was to make sure nobody in the building left with a dry shirt. In my case, I have to say that they most definitely succeeded! Halfway through the show I realized that Japandroids doesn't really have any slow songs, so this show was probably going to be loud and sweaty for the entirety. They did play what they called a "slow song", the closing track off of their fantasitc 2012 release Celebration Rock called "Continuous Thunder." It turns out what Japandroids considers a "slow song" would probably still pass for a heavy rock song for most bands.

The on-stage chemistry is apparent between King and drummer David Prowse. Their playing is not always perfect, but it's not meant to be — they seem content with being just a bit sloppy at times, which is hard to avoid when you're playing as loud and as fast as these two are.

The climax of the show came when they broke into their 2009 track "Young Heart Sparks Fire", which set off a wave of crowd surfers and a giant sweaty mess of people all yelling along at the top of their lungs. I left Neumos sticky with sweat, with ears ringing and my voice sore, and I could not have been happier about it.