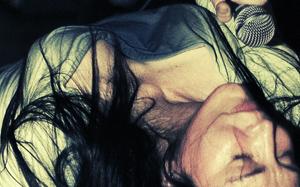 Confronting male-female power dynamics and addressing twisted glimpses of sacred inversion with beauty and terror on her new solo double release The Men Album, legendary underground death disco diva Jarboe divines twenty vignettes incorporating rock, punk, dance music, noise, and et al. Fans of new bands like the mesmerizing Black Angels, who use spiritual drones as their aesthetic templates, would do well to catch Jarboe in live performance, as she blends her ferocious, Yoga-fueled skills with an internal combustion only coming from genuine mortification.

For those who know her by her work with art-metal band Neurosis, it might surpirse them to find out that Jarboe started out singing songs like "Feelings" in lounges whilst she attended college. She found a connection with miserable alcoholic businessmen at their sentimental apexes, and even sang a demo for a Coca-Cola jingle to pay her bills. She didn't come from a bourgeois background. Instead, she tried to make a living with her talents, with her voice, practicing in every church choir she could. When she was very little, her father forced her to sing one note over and over again as he hit the key on a piano; it's this submission to the pain of the muse that crafted her instrument for the torture of Swans, Michael Gira's NYC band of sound-terrorists. Their 1984 debut Cop seemed sonically political and terrifyingly psychosexual; the follow-ups Greed and Holy Money no less so in 1987.

Jarboe's father had worked for the government while she was growing up and would often live undercover, adopting various personae, changing his appearance. He actually tapped the phone his daughter would use, including discussions of her teenage sex life; she would later use these for her own music, and thus possibly initiated her attraction to working with enigmatic, unknowable men like Gira. The two of them released their first solo albums, both titled Skin, at the same time in 1987. They have worked together off and on since, though after a devastating relational disunion, the past few years Jarboe has mostly concentrated on working in her own realm. Interestingly, that has eventually led her to collaborations with the Other gender for the diverse and captivating The Men Album, featuring such iconic dark-side musicians as David J from Bauhaus ("Angel David"), Jim Thirwell from Fetus ("Angel Jim"), and the inimitable Alan Sparhawk ("Found").

Fans of the Bad Seeds should not miss the Friday night show at the Triple Door when she's performing with Blixa; but then again, Sunday night has the utterly devastating local troupe Suffering & the Hideous Thieves roiling in a rare live performance as well.

Do feel better letting life go on as it was with traveling, instead of trying to document so much that was going on this time?

No, I think what I would like to do ideally if I'm gone for that long again, since I don't have a laptop, get one, so I have a situation where I can get on-line on my own. I think it's important to keep up with it. So ideally I would be keeping up with it in a very detailed manner. It's just so exhausting, because live I really do a very athletic performance, physically and vocally, and it was so intense that I had this very smug attitude about what my body and vocal cords can endure. I've had that ever since I was a child, so once in a while things will intervene and give me a one-two punch and knock me on my back. Because I have this attitude that I am invincible, and everybody that gets into my inner circle as friends or whatever, they find this really infuriating, because of the criticism that I don't take care of myself, it's just push-push-push, and in terms of athletics, it's severe, where it's not good enough to run a few miles, you've got to run n ine miles.

So it's kind of like compulsive personality traits where you just push-push-push. So on this tour I was very physical, moving all over the place, jumping off the stage, performing from the audience, and doing a lot of strenuous things with my body, to the point where you'd wonder how anyone could do it, and say every night at the end, with the drums, as I would percussively bend over and get my equilibrium, and twirl my head in this pinwheel manner, just twirling it around pretty rapidly to the beat. And there were some cities where they understood that that was intense and there was this display of Olympian skill, and they would really appreciate it and break into applause. But that wasn't what I was looking for, I was just feeling the moment, and really trying to push it over. So that was just kind of intense every night. But then my voice was trying to run the ambitious gambit, to do that a few times is pretty easy for me, but to do that for a long time after a while, I was just glad that it was done, because I needed a break on my throat.

You seem to really thrive in collaboration, working with community, like on The Men Album. You worked on that for like six years with various friends.

Yeah, I know. And I'm about to do it again in 2006, except it's not with a bunch of people on my albums, I'm going to theirs. I'm working with Justin Broderick on the new Jesu album, and I'm also working with a new metal band called Cobalt, I think they're based in Colorado, and I'm also working with Beyla, part of the group Dysrhythmia. Those are all going to be really exciting collaborations for me, and I'm going to be going up to New York to work with Beyla, and if I go to England I'll be doing computer files for Justin Broderick (seminal industrial pioneer, who helped found Godflesh). Cobalt will be sending me music for me to add vocals in my studio, and sending it back. And I maybe doing a guest vocal on a Red Sparrows project, because they're instrumental, and they want to do an album where they have different singers doing different tracks. And since I'm doing two shows with them in February on the west coast, that will be cool. I love them anyway s, I just think they're so cool.

So it's already into the fire with the collaboration again, they're just things that people ask me to do, because it's so great leaving anything that you're clinging to behind, and opening up to other possibilities. And being open, and letting go of the control, and kind of seeing if something takes on its own life, when it's you and other people involved in it, rather than you controlling every little thing about it.

So I'm going to do that with them, but then the next album I'm going to be doing on my own, kind of like the follow-up to The Men Album, I'm going to try really hard to have it just be me. A one woman operation. And a lot of people are saying 'You should do The Women Album next,' but that's what everyone expects me to do. And I don't know, that wasn't the plan when I started this. It just sort of morphed into this title because that's what everyone was calling (The Men Album), but it wasn't like I sat down and thought of that. I just thought it was funny, like the Beatles' White Album (laughs), a tongue-in-cheek thing.

Who would you work with on The Women Album if you were to do it?

Very immediately, Diamanda Galas and Lydia Lunch come to mind. We're kind of the 'Unholy Trinity' as it were, ha! That to me would be one killer project. I'd love for the three of us to do something. That's my fantasy album is to do that.