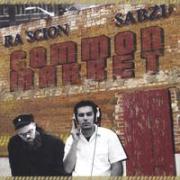 Like an encroaching tidal wave, the Seattle hip-hop scene is rising, and floating along the funky luminescent foam is Common Market, a seamless combination of enlightenment from RA Scion (AKA Ryan Abeo) and smooth sound-sculptor Sabzi (AKA Saba Mohajerjasbi). Scion's easy-paced, melodic teaching harkens back to a time before emcees would "make better actors," as he humbles the fakeness of the scene, while the younger Sabzi triggers all sorts of joyful and rhythmic mnemonics to keep the flow both happy and profound. The combination of wisdom both earthy and spiritual with hook-laden, accessible grooves pushes the debut beyond preachy nostalgia.

Common Market is Scion's follow-up to 2003's Apostrophe EP and 2004's Live & Learn, from his own label SCIONtific, run by his wife Mariangela. That latter full-length had two guest spots by Blue Scholars' Sabzi, who had hooked up in the hip-hop scene by mutual friends who knew they shared something supernatural in common, besides their exceptional talents.

The sense of the divine that permeates the self-titled full-length is not just lyrical imagery, as the two men are practitioners of the Baha'i faith. Baha'i's are grateful for existence, respectful to other belief systems, encourage peace, and promote enlightenment. Those are four things that seem to be strong elements of RA Scion's teaching; raised a Baptist, he made a conscious decision to break from cultural and religious narrow-mindedness and accept the City on its own terms, to shine a light from within.

Common Market begins with "Re Fresh," in which Scion announces boldly, "It's time to let it go." A sense of renewal then spreads throughout the next fourteen tracks. Raised in Louisville, Kentucky, and taking figures of authority on with his skills after his family relocated to Monroe, he claims to have at one time lost hope, but now it's come back to him. On the infectious and challenging "G'Dang Diggy," he lays into people fucking shit up with "Home is where the hatred is, I appreciate your fake smile but it's wild here trying to raise kids," and then snarling, "Your squad licks the posterior, I don't know how to make it any clearer."

This ability to be both protective and loving is a wonderful balance to hear in modern hip-hop, reminding fans of the days when KRS-One (who has taken them on tour and has been a proud supporter), Grand Puba, Brother J, and Jeru the Damaja worked around the bling and crunk. Sabzi's percussion style here is more like the Boom-Bap Project than the scuttering rhythms he lays for Blue Scholars, showing the diversity of his programming palette. His background as an actual musician, a trained keyboardist, makes the album seem extraordinarily musical compared to the awkward cut-and-paste aesthetics of many commercial rap albums.

KEXP has been championing Common Market, and John Richards among others has proclaimed them one of the most exciting things in hip-hop today. As egalitarian as they are, it's easy to hear that the last thing their music can be called is 'common.'