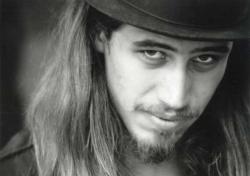 The Gospel of Folk Punk according to Jason Webley

When Jason Webley took to the stage at the Vera Project this Saturday, he immediately went into performance mode. During the first song, he started ticking his head back and forth like an automaton — one of Webley's signature moves. The other thing you will always find at a Jason Webley concert is his hat. That thing has traveled the globe with him, fitting loosely enough to fall off occasionally, but mainly it just moves in time to his eccentric beat. When Webley's not hiding behind it, he makes faces at the crowd to accentuate his songs. After a song about relaxing, Jason's long scraggly hair was streaming down over his face and he pasted on crazy smile that made him appear like a demented prophet (of sort that talks to trees and eats stickbugs). It made you want to lean in and listen to what he was saying…

Gravel-voiced proclamations streamed off the stage along with Webley's apologies for having lost his voice earlier on the tour — during one song, he told the audience that "there are a few notes that I still can't hit – so just imagine they're there." But really, if fans didn't have the songs off his latest album (The Cost of Living) memorized already, they wouldn't have noticed at all. Webley's insane charisma charmed the audience to the point where, during the second filming for the music video of "Ways to Love," he cajoled them into wiggling their fingers high in the air for five minutes and then instructed everyone to turn their fingers to their neighbors armpits; a massive tickle fight ensued, adding to the weird rhythm of the night.

If you've never heard of Jason Webley before, you could get ahold of one of his albums and listen to the gypsy-like punk played with accordians and experimental strings and lots of "yadadadas;" he'll appeal to fans of Gogol Bordello or the Dresden Dolls. But the best way to experience Jason Webley is just to go to a show; he's local, and anything he does on stage is an intimate, unique performance. At times, Jason sings like a southern preacher: possessed with the soul and the message of his love for life, dancing, and the human spirit. While singing on Saturday he danced back and forth with his guitar, playing it vertically and moving it in imitation of his front row dancers with their friends and dates.

True to form, it was not Jason Webley's best show — but only because nothing qualifies as that due to the individualistic experience Webley brings to each performance.