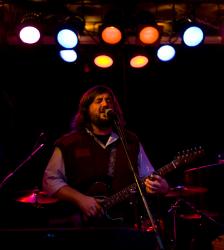 Aqueduct at the Croc

"How about a toast Seattle? A little shot!" Full ear to ear grin, David Terry swilled back his liquor and kicked off the Aqueduct show at Crocodile. Camaraderie was the theme of the night, Terry tossing jokes through the air with the audience. He has a bit of clumsiness to him, making him all the more endearing and familiar; the crowd just laughed it off along with the jovial singer. His personality is a reflection of the music he creates with the band Aqueduct, the hip kid's alternative to mainstream fluffy pop. Terry and co.'s brand of indie-pop is smart, full of feel good lyrics spiced up with the right amount of "fuck" and "bitch" to keep things less sucrose and more mature. The compositions keep from becoming too bouncy and asinine by containing moments of fine tuned movements and guitar solos.

"Suggestion Box" served as the perfect example of this formula. Like a catalyst thawing the ice of the crowd, the first few measures broke the crowd into dance, singing along. Interspersed throughout the crowd, a handful of dedicated fans beamed, moving the most, not missing a lyric. One group in particular heckled Terry, and announced themselves as the "assholes from Florida." Opposite corners of the country don't deter these kids from an Aqueduct fix. The band is currently in the midst of back to back touring.

Raising his voice above the rest of the crowd, one fan insisted they play "Laundry Baskets." A bit suspicious, he almost seemed planted in the crowd, as Terry referred to him as Ricky, back and forth banter taking place, the singer a bit reluctant, the fan rather persistent. Finally, Terry succumbed, either planned or not, explaining first, "This song is one of the trickiest to play live, we've been a bit gun-shy." If fan satisfaction is a pay-off, Aqueduct was reaping in big time with this song.

"Yay for the Sunday crowd! Let's all pretend it's Saturday… and party, get drunk!" Terry exalted to the glowing crowd. Song after song he would gleefully say, "Alright, this next song is a JAM." After about five rounds of this, he finally determined, "This next song is really epic." He was just as charming on-stage as off.

When I left the show, I didn't imagine it was Saturday; it was still fully Sunday night in my mind. Instead, when I thought about the impending early morning day job and week ahead, I felt glad to start it off with a permanent smile planted on my face thanks to Aqueduct.