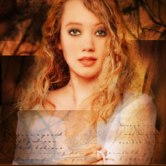 Musical Defense Rule #78: never trust a record with a softly focused cover photo. For example, do you like Celine Dion? No, you don't, because not only is she a soft-focus repeat offender, but also because her pretentious French-Canadian ass is terminally annoying. Do you like Faith Hill (that former country but now pop blonde lady singer married to some other country singer)? No, you don't, because you don't even know who she is. But if you did know, you would not like her because she is also quite fond of 'ye olde soft-focus portraits.' Both of these pop chart toppers paste ridiculous photos of themselves on their CD covers and create music that is über-orchestrated, hyper-produced and utter shite.

That being said, it's hard to fight the urge to discard 19-year-old Jessi Hamilton's self-titled debut based solely on the CD cover. Her dewy-faced, doe-eyed image stares out with a sultry vacancy. A tendril of blonde hair partially obscures her earnest face. Is it just me, or is that camera lens smeared with petroleum jelly? That picture is lit like a Streisand movie set.

True to form, the cover isn't the only thing amiss; alas, the music is not exactly earth moving. North Carolina native Hamilton, a classically trained pianist, wrote most of the songs herself. While her bio starts off much like that of fellow youngster singer/songwriter Fiona Apple, the similarities stop right there. On Apple's debut, the songwriting showed maturity and depth. Hamilton's lyrics, however, pale in comparison and her melodies are underdeveloped and predictable. The record lacks direction and contains a hodgepodge of pop song styles. When she sings, Jessi's voice has a lot of tight, short vibrato like Fiona or Tori Amos, but lacks their sass and strength. Whereas Apple seamlessly worked urban, hip-hop beats into her songs, Hamilton can't quite pull it off.

She raps on "Keep the Motor Runnin'," which is reminiscent of Madonna's painful "yoga" rap. On "Turn Off, Shut Down," she features Virginia Beach rapper Ghetto Prince. The song reeks of Wilson Phillips feel-good musicality interspersed with a rapper who sounds suspiciously like the rapper from Snap (or like the rapper from C+C Music Factory, or any of the other interchangeable late-eighties pedestrian dance-rap vocalists). There are several ballads that lack sincere vulnerability and the upbeat danceable tunes are trite and mindless. She also covers Al Green and Randy Newman. In the hands of a more nuanced producer, her music could have possibly worked better through the release of several EPs showcasing her various musical interests.

Unfortunately, this collection of saccharine sweet pop songs and their heavy production just sound inauthentic. I was shocked to discover RockRGrl used "I'll Cry For You," on Discoveries 2004, a showcase of unsigned female artists. The methodical melody and whispered lyrics are too earnest compared with the track's overproduced and swellingly emotional soundtrack. In much the same way, Jessi Hamilton's gritty intent is completely washed out of her softly focused glamour shot.