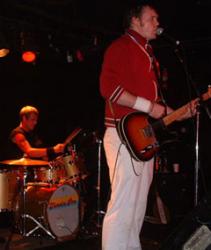 I know I've already written about Tennis Pro. I know I've already sprinkled them with loving adjectives like zany and fun but I have news for you, readers — Tennis Pro has new songs! And fun new stage antics! I wouldn't be doing my imaginary job if I didn't keep you in the Pro-know.

My favorite new song features a semi-dirty and ever so catchy chorus in which Phil Peterson {the bass player/singer} states with no regrets, "I'm takin' your mom home tonight." And if that wasn't enough visual for you, at the end of the song he admits, "That song was based on a true story. I wrote it this morning. I'm sure you can put that all together." Twisted. Twisted and oh so good.

Lead singer and guitarist extraordinaire David Drury asked the crowd during one of their last songs, "Who is going to volunteer to write about us tomorrow in their blog?…" After a moment of silence and no movement he upped the ante with, "Whoever volunteers gets a special treat." After Phil's song about taking someone's mother home, I was a little frightened to see what this Tennis Pro treat involved. A young teenage girl raised her hand and was invited onstage. David gave her a tennis racquet and exclaimed, "During this next song you get to smash the tennis racquet." That's when I wondered why I didn't volunteer. Oh wait, I don't have a blog… does this website count, I wonder?

Special sidenote for David Drury's eyes only: David Drury, I'm writing about your band in my "blog" — I want to smash an official Tennis Pro racquet!!

Anyway, the blogging teenager smashed that racquet into smithereens. I have no idea if she followed through with her morning after promise, but she looked inspired as she annihilated that fine piece of tennis equipment.

After the deconstruction, it was time to build things back up again with soothing sounds of Argo. This night's show was a special one for Argo, as it's their last show in their original formation for a while. Scott, the main Fender Rhodes player for the band, is leaving for six months for school and to travel Asia. As a special going away present, he got to write the setlist for the evening.

The first song on the list featured an acoustic, instrumental number. Whilst listening to this nonlyrical song, I realized that listening to Argo is like trying to date a shy boy. He's right there in front of you and you're intrigued by him and his mysterious melody, and you know you'll be smitten with him as soon as you can get some words out of him — it's just going to take patience. By the second song, I had what I was longing for: lyrics. Pretty, pretty lyrics. And Argo embodies everything you'd expect from boys who prefer to keep their words buried: sweet, unassuming, and mysterious.

To complement their soft sound, Argo decorated the stage with vintage lamps. {Yes, like living room lamps.} The warm glow set the stage for intimate conversations without talking; Because in a lot of ways, shy boys are better than the verbose ones. But you must realize to truly get to know the shy ones, you have to spend lots of time with them. This may seem like an impossibility since a main member of the Argo clan is going to be thousands of miles away. Luckily, Argo will still be playing shows in Scott's absence.