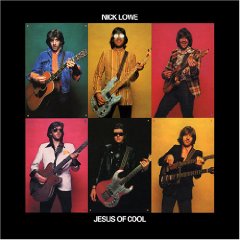 This is Nick Lowe's first solo album, released in 1978 after an excitement-filled misery ride with his boundaries-bouncing pub rock band Brinsley Schwarz, and around the time he started helping artists like Elvis Costello and The Damned create timeless sides for the majestically eclectic indie label Stiff. By that point, Lowe had suffered a huge amount of humiliation in the music industry, as anyone playing music for a living who wasn't a stadium-stuffing bonehead was likely to receive.

In spite of his incredible shrewdness in creating fun, genre-jumping pop songs that tickled the mind as they begged to be played over again, Lowe had a hard time getting a break. This album was originally called Jesus Of Cool in the UK, but the American label were wary of the faithful picketing shows and such, so some tracks were shuffled about a bit and became Pure Pop For Now People.

You probably have already heard that story, but it bears repeating, as it reflects how, when put to the test, Lowe can create tasty material out of the crap people dump on him. Pure Pop may not be as funny as Jesus Of Cool as a title, but it underscored the satirical portraits of the various musician types Lowe parodied on the album sleeve. There were different clothing styles for both countries of the record's release — all of which have been rounded up for the superb packaging of this perfect reissue.

Besides the sweet cover art and really good liner notes by Will Birch (who wrote a great book on the history of pub rock and how it evolved into power pop, punk, etc.), the disc collects all the tracks that were floating around at the time that were either used to replace songs on the original UK release, or became B-sides (and a few rarities besides). However, it is the narrative strength of the original album's material that makes this an essential purchase; but be thankful that for example both versions of the same song, "Shake And Pop" and "They Called It Rock," are here, as the redux for the U.S. version better serves the hilarious lyrics.

This isn't really a concept album, but it does consistently show how a gifted and intelligent songwriter, musician, and producer can really shake diamonds out of his stung-clenched heart. Recurrent fantasies of show business failure and degradation weave through each song, from the aforementioned "Shake"/"Rock," in which an unnamed (perhaps his own previous?) band takes lumps for the sophomore slump; mocking vitriol splashed on the low level record company control freak described in "Little Hitler" ("can I guess why you knocked me off the guest list?"); the morbid black humor of "Marie Provost," a real silent movie actress eaten by her little dog ("the cops throwing up everywhere over what they found," sung very excitedly in a moment of sheer wrong pop bliss); and raging venom turned into poisonous cheer on the "Rollers Show," probably the happiest and angry song ever written about musical hacks.

If you're a prairie dog hiding in the publicity department to feel cool, a grinder trying to make money off music you don't understand or even listen to, a mogul whose arrogance has outlived his creativity or vision, or simply a big ego wanna be over the hill rock dude, Lowe has his sites set on you here.

The magical thing is, you won't want to stop hearing this guy complain, as it sounds so joyful and masterful, hitting everything from avant-pop ("I Love The Sound Of Breaking Glass," a dig at Bowie as good as anything Bowie ever released) to grinding rock "Heart Of The City," where the doors open to exploitation and redemption). The most complete and stylish version of this super-important release so far.