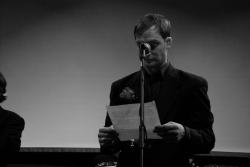 Week II of the "Awesome" Cycle: Photos from a funeral

I've had the honor of shooting the first two weekends of the "Awesome" cycle, and I've got to say — from the flawless melodies, and the almost-improv-but-better banter, and the visuals — these shows are not to be missed.

When I watch these performances, I forget that I'm seeing a live band, because it feels like I'm watching a movie, or at least that these seven guys (eight, last week with Sean Nelson guest appearing) are performing over a finely-tuned recording. It's seriously that good.