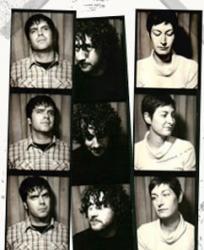 The Jeunes, with Carlo, Monostereo, and DJ Justin Case

On a recent Tuesday night at the Re-bar, I attended one of Tablet Magazine's weekly Clinics. If you aren't already in the know, Clinic showcases local talent in the form of live bands, DJs and some righteously naughty nurses. Sounded good to me.

So I hijacked my imaginary fella and we readied ourselves for some school night fun. This night's bill had Monostereo, Carlo, DJ Justin Case, and one of my local favorites, The Jeunes. And don't forget those nurses. The Naughty Nurse Brigade was there in full uniform, ready to treat any and all ailments, boo-boo's big or small.

The first trio, Monostereo, sort of snuck up on me and got started without any warning. It's quite apparent Monostereo LOVES playing music, just maybe not so much in public. At times languid, and other times urgent, Monostereo's lingeringly melodic songs are well supported by subtle rhythms. I enjoyed their set and appreciated their obvious lack of self-importance. Singer/guitarist Leah Tucker fronts the band with her richly smooth alto voice that occasionally tips with blues-inspired inflections. Backed by Damon Cleary-Erickson on bass and the very powerful drumming of Ian Curry, Monostereo displayed promising local music talent while honing their on-stage chops.

Between sets was the awesome spinner of records, DJ Justin Case. He was, in a word, rad. Not only is he Black Nite Crash's drummer (another local shoegazing favorite which in and of itself calls for a toast), but he played one my absolute favoritest bands from across the Atlantic, Clearlake. And then as if that wasn't enough, he mixed in local electro-synth band, Infomatik. So for that Marcel, err Justin, I raised my glass to you… exactly 17 times.

Second up on the bill was Carlo, a trio originally hailing from Salt Lake City, Utah. Carlo meshes thumping bass lines and crashing percussion under alternately crunchy and delicate guitar for an ultra modern rock sound. Their enthusiastic set was ear shattering. Bassist Lindsay Pulsipher stomped her feet in a militaristic march, all the while pounding on her bass strings. Chad Stieg was on the other side of the stage, who one moment could be crouching low focusing intently on his guitar playing and then unexpectedly popping up to passionately sing into his mike.

Lindsay backed him up with her unique vocal styling. Between them, a drum kit pounded like there was no tomorrow by Ryan Gee. During their ferociously energetic set, it dawned on me Carlo could be the next "End" band. They are pretty and well-coifed, they are loud, and they, as Curtis from The Jeunes exclaimed, are sick.

Speaking of The Jeunes, this was the whole reason I was out on a school night. And I was damn excited. It's hard not to completely adore The Jeunes' EP Four Songs. It has been in very heavy rotation on my iTunes for about four months now — as it should be on, ahem, EVERYONE'S. Sadly, I had not been lucky enough to catch any of their shows up until this night. Anticipating their set, I was anxious to hear what was brewing in their practice space. And like the first mint julep on derby day, their nine-song set was oh-so refreshing and damn worth the wait.

Each dressed in black shirts and dark jeans, the band exuded a subtle, approachable coolness. The Jeunes deftly meld shoegaze-y distortion with a touch of British New Wave and a wedge of edgy, mid-80's prog flair that translates very well live. As if this should be surprising.

Singer/guitarist James Hall's guitar playing was thick and clean despite being plagued by some feedback, while drummer Curtis Hall crashed the shit out of his cymbals. Obviously having a blast, he hit them so hard that they would bounce four inches away from his kit, forcing between-song cymbal adjustments. All the while the lovely and stylish bassist, Jaime Clapper, would sway to the rhythm of each song.

They opened the set with a slightly dark and moody song called "Missing Person" and then launched into two songs off the EP: "It's Alright" and my favorite, "Someone Else's Friend." They then breezed through a bevy of new songs which left me awestruck and starry-eyed. "Time Is On My Side" was a rockin' tune peppered with James Brown-like howls in the background.

Later, the mesmerizing and angelic backing vocals perfectly hovered over a more gravelly-dreamy-voiced, James on "Who Do You Love?" This song also had some stellar guitar distortion and oddly workable use of maracas. They wrapped up the set with "What You Do To Me," a blistering love song that left my ears ringing until the next morning. It was exactly the climactic finish the evening needed. The Jeunes did not disappoint and all the more reason why I continue to adore them.