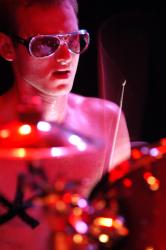 My favorite thing about this sold-out stellastarr* show was the bewitching duct-tape asterisk affixed to long-necked, oft-bespectacled drummer Arthur’s right nipple. It somehow managed to stay there well beyond a vibrant, frantic, progressively-sweatier set of retro-flecked alterna-pop. Arthur has a beautiful lean torso, from which he could frequently be observed swabbing perspiration with the very shirt he’d removed after the first song.

It was hot. (The temperature was high too.) And through it all, that magical DIY asterisk remained unfazed.

But I digress. Arthur certainly isn’t the only sexy NYC boy in this group. Frontman Shawn and guitarist Michael were also in fine form, and equally energetic in their own special unique ways. (It’s quite possible that Michael was hopped up on the bean; he loves him some mochas.)

I particularly liked the Breeders-esque song “Jenny”, which igLiz made me listen to… I mean did the courtesy of playing for me several times in succession once during a weeknight return trip from Ikea. That’s the rollicking hit single, the one where the stunning girl singer and bassist Amanda goes "Oh wa oh… ah. ah. ah. ah. Oh wa oh…". At this show she belted out that recurring phrase like nobody’s business; the long blond hair she’s so fond of getting in her eyes shimmied and swayed with each and every ah.

“My Coco” was oddly captivating too, though I have no idea what the hell it’s about, or what/who a “coco” might be. And the lyric is actually “My Cococo” anyway. Annoying, but irresistible. (Tomacco indeed, igDana!)

New, post-debut material went over well too. It all drove the crowd wild, in fact, and general consensus among show-goers in my immediate vicinity was that this was the most polished local stellastarr* performance to date. I’ll be front and center again at their next Seattle gig… provided, of course, that Arthur remembers to pack that duct tape.