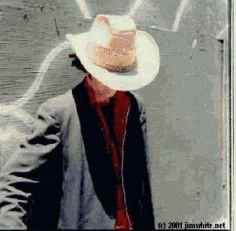 Jim White was an aspiring model when he was twenty-three years old. He was in Europe, waiting on another shoot, in a hotel room he could barely pay for. Out of boredom, he began to pick up books. He hadn't read much before — his strict fundamentalist upbringing kept him to the Bible and fantasy by C.S. Lewis. Now he was starting off with God Bless You, Mr. Rosewater by Kurt Vonnegut and Catcher in the Rye by J.D. Salinger, then moving on to Dostoyevsky's The Idiot and Ayn Rand's The Fountainhead.

"I was saved by Salinger, and the satirical sanity of Vonnegut," he says. "Sure, it was a pop culture conduit. But Vonnegut taught me that a person facing terrible isolation didn't need to resolve it religiously."

Just a short while before, White actually had tried to redeem his life by walking 'the narrow road' in Florida. He'd gone home, a prodigal son who had been surfing in California for a few years, and the Christians who were a big part of that scene inspired him to renew his childhood spirituality.

"I'd been 'saved' when I was fifteen," White says, "and I went back to Pensacola to embrace the church, to have a 'spirit-filled life.' Within four months I'd opened up a surfboard factory, and fell in love with a girl I attended church with."

But White's life took a turn for the worse. "She started cheating on me, having sex with the guy who sat in the pew directly behind us," he explains. "My business partner, who also went to that church, embezzled a bunch of money from our company to fuel his cocaine habit. And then my best friend got in a horrible motorcycle wreck and was lingering on the edge of death. We went to church that night, and my friends and I resolved to pray for him exhaustively — which we did for two weeks. Then he died.

"I was leading the singing at that church, and then one night realized I couldn't do this anymore. I had a 'hallelujah breakdown.'"

White says he realized that all of this activity is just a misunderstanding. "Who are we to tell God what to do? I decided not to worry about my faith anymore. I'm not going to go out of my way for it. That feels like you're inventing it."

His sister was getting into the fashion industry in New York, so he moved up to be with her, to try and help him forget his misery. Someone mentioned he could make it as a model, so he gave it a shot. As that career floundered and his intellectual curiosity deepened, he began to write songs that combined the ecstatic religious imagery and scattered cultural debris of his upbringing, culminating in his first album, Wrong-Eyed Jesus. When it was released by David Byrne's multi-cultural record label Luaka Bop, White returned to Pensacola to play a free show.

"I expected about fifty people, but only about eight showed up," he says. "Six of them were Born-Again Christians trying to get me to come to their church." In the parking lot afterwards, they told him that he should accompany them to their services, that God was "really, really there." This angered him so much that he kicked his car and yelled, "The Lord is in my car!" and "How can you say that you know where the Lord is?"

At nearly fifty years of age, White still has a profound respect for the mystical side of things — he rejected Rand's Objectivism because "she has no conception of mysteries from externalities; she places herself in the nexus of perception" — though he maintains contentious friendships with Christians.

"I don't hold them too close; they tend to view my opinions as utter heresies," he says. "They don't seem intellectually prepared to deal with them. I know it makes their hearts ache. I don't proselytize but when they get on me I give it back to them. I just think that when you say, 'This is God,' then God disappears."

Jim White is white. Very white. He's related to Princess Diana and had relatives arrive on Plymouth Rock. This whiteness was troubling to him when he was a boy, a sailor's youngest of five and an outcast due to their vagabond life — so he didn't feel he fit in with the other white kids. "But the black kids wouldn't accept me, either, so I struggled hard to be pathetically white — instead of 'cool' black, making myself white enough to slide into a strange realm of grace, becoming super-white."

He feels the ex-Talking Heads front man who has put out his three albums (Wrong-Eyed Jesus, Drill A Hole In That Substrate And Tell Me What You See, and No Such Place, respectively) shares this craving for white-defined soul with him. "Though these days he's trying to be the Latin lover," White cracks. "He does this knowingly — he's Scottish and has become a wanderer; he knows the pratfalls, sings beautiful Latin songs, it's his acknowledgment as a universal human being."

White's new record is a soundtrack made after Andrew Douglas, an Englishman who was inspired by the tales of religion and despair in the South on White's first album, collaborated with him on the documentary Searching For The Wrong-Eyed Jesus. It's a compilation that features previously released songs by White and roots-based covers and music from contemporary artists such as Johnny Dowd and Maggie Brown, Cat Power, Sixteen Horsepower, David Johansen, and the Handsome Family.

Broadcast initially on the BBC, the project had much input from various sources — some inbred, like the twisted tale-weaving performances of striking rural-gonzo novelist Harry Crews, who happened to be a teacher of White's wife in Florida. "I couldn't really be the quintessential voice of authority when it came to the subject matter," White says, "so the producers said, 'We have someone to do that.'"

But Crews wasn't particularly enamored with working directly with White. "He wasn't really interested in talking to me, though when the camera was on he really worked. He was in a lot of pain from cancer. When he limps away on a cane at the end of his scene, he's not acting."

Another awkward personal connection is related to one of the album's songs, White's own "Christmas Day," from his previous release. "That's about Christmas 1998, and in the film one of the three ladies singing 'Knoxville Girl' was the mother of a child we'd had three months prior to being in the bus station described in that song. Mostly when I write songs I write about what I want to be. But this one was about me realizing that I was never going to have a happy life with this woman, even though we had this child. And all those promises that descend on Christmas, when grace is the rule of the occasion — feeling this horrible sadness among these other people suffering in the face of what hope is supposed to be promising you on that day."

For an example to confirm this juxtaposition, I mention how he drops both "Amazing Grace" as well as James Taylor's song "Fire and Rain" into "Christmas Day," both tunes ubiquitous in our culture — one joyful, the other melancholy.

"The great thing about 'Fire and Rain' is that it's a dictionary of sorrows, but it's one of the first songs many people learn to play on guitar," White says. "It was a strange moment in popular music when sincerity was applauded."

When White converted to Christianity as a teenager, it was at the legendary and notorious
Assembly of God church in the Florida panhandle known as the Brownsville Assembly.

"I took these English filmmakers to Brownsville," White explains. "When I got saved, there was only about fifty people in the congregation. Then strange things started happening, and the church got enormous. It had an affect on the whole nation. I thought, 'Let me take you to this place.'"

White took director Douglas to a healing service. "They shut the doors and got to business," White says. "No sermon, nothing but intense emotional laying on of hands. We were sitting behind this morbidly obese woman, and the deacons came down to heal her. As they were praying over the 400 pound woman, and she was being 'slain in the spirit,' one of the deacons whispered back to Andrew, 'You're a catcher!' That meant he was going to be the one she would fall on. Andrew is this posh English atheist, who has serious disc problems in his back, which he has a lot of pain from. He literally started praying against her getting healed. So there was this great collision — and in the end Andrew won! She walked out of the church without being healed.

"When I later told a fundamentalist friend who works at an advertising agency about this, she said, 'That can't be true, because God doesn't hear the prayers of the unsaved.'"

White finds this sort of attitude pestiferous — "truly damaging to a country with a broad cross section of Americans feeling a spiritual void," he says. "It's a quiet, slow rendering asunder a holy garment. What happens is that their religion becomes a hiding place. They are warned not to hide their light under a bushel, that entropy will take it down."

An interesting thing to note is David Eugene Edwards' participation in the film and soundtrack, both solo and with his original band Sixteen Horsepower. I tell White that Edwards is well known for his own theological and cultural conservatism.

White responds, "Well, it makes sense. I didn't talk to him myself. The filmmakers let him give testimony in the movie. He didn't seem like the kind of guy who would force his notions of God down my throat. But I did have a discussion with his aunt and uncle around the time of filming about people in churches putting Bush in office, and I did later regret the strong language I used.

"Americans desperately need to be hooked up to others in the world right now," White says. "And as one of my favorite teachers once said, 'No, no, no — only ask questions.'"

It was reading fiction that got Jim White into storytelling, but he claims that he's also strongly influenced by films, a particularly American art form. "I was really inspired by Paris, Texas and The Elephant Man as well," he says. "The latter film especially, with how the character felt in the context of humanity.

"There aren't very many artists that can create mystery," he asserts. "David Lynch and Jim Jarmusch are two. But Jarmusch isn't at odds with himself. I prefer him. Lynch can create mystery, too, but it's because there's this hunger for annihilation in his work. Wild at Heart is his best film because it most represents this. Lynch is a person with a hunger for oblivion, he's one of those people who has to tear down the temple, tear down the temple, to build it back up again."

"Richard Grant's American Nomads is a book I would really recommend," White offers. "It describes what the displaced mind tends to do. It's these Scottish-Irish people who always tried to settle someplace. That's who pretty much settled the South. They were seeking some sort of worldly representation for an otherworldly dis-ease.

"When there's a bubbling cauldron underneath, as there is in the South, you need a surface for society to exist," White says. "In truth, I'm away from that now. I wrote a song in 1997 titled 'Angel Land' that has the line, 'Mostly now these days I'm dreaming normal dreams.' . But although I am relaxed I am not asleep."