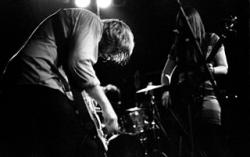 It can be hard to explain Kinski. Their sound is the sort of weighty thing that demands intense nouns, record-clerk-style: Krautrock. Psychrock. Steve Reich, Ash Ra Tempel, and even the Los Dug Dug's. If you're anything like me, the Importance of these words usually spells "hep beer coaster," i.e. an album owned but unheard, a coolness badge made of plastic. You want to love it, but you remain unhooked.

Imagine the happy surprise, then, when I plugged into Alpine Static, Kinski's second full-length for Sub Pop. It's lovely stuff, chunky and slightly stuttering, full of repetition as crushed by bass, drums, guitar-crunch and a flute. Best, the songs come as they climb and crumble. There's no gristle here, but there is melody and echo, tunneled drone, and some of the greatest song titles this side of seventh-grade garage-bands: "All Your Kids Have Turned to Static," for example, or "Hiding Drugs in the Temple (Part 2)." The star is "The Wives of Artie Shaw," a taut track worthy of kneecap rattle. There are no vocals, and that's just fine.

Onstage, the Kinski quartet is all focus, rarely speaking but unnervous, communicating through eyebrow and intuition. Clearly, they've done this before. Unlike other artists who have recently unveiled new albums in this town — Sleater-Kinney comes to mind — Kinski arevunabashedly brave about their realities. Chris Martin curls as he plays, slowly working himself into a capital 'C;' Lucy Atkinson picks and strums through half a curtain of brown hair. Watching them feels like four dishes in a buffet line, but then you close your eyes and hear the whole.

The crowd was genuine and genuinely excited. Fists were punched; the roadie was rocking out; and Charming Snakes tees were on sale for "$10 or whatever you have." I was happy to see several dewy girlfriends forgetting the beers, slipping from the handholding, and dancing in that visceral, gut-centered Kinski-way. Good for them. Sometimes, avant-garde experimentalism feels more freakout than lovefest; here, such is not the case. You might be alone at Kinski, but you feel warm nonetheless.

Like peanuts and a cherry, the band encored with a fuzzy bear-hat, plus a cover of the Ramones' "I Wanted Everything." Sometimes, you get what you want and need.