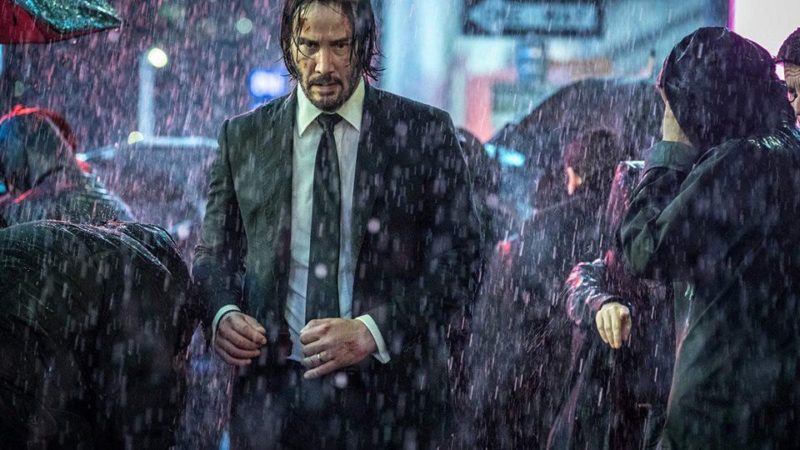 Friends, the third installment of John Wick has arrived and IT. IS. AWESOME. John Wick: Chapter 3 – Parabellum is fan-fucking-tastic entry into the series, and even though the in-jokes are more frequent and the plot is crazier than ever, I found this one as amazing to watch as the last two.

Again picking up directly after the last movie, Chapter 3 finds John and dog running through the streets of New York, frantically trying to prepare for John-mageddon, in which Mr. Wick is pursued by every assassin in the city for a $14 million bounty — and without any help from his buddy Winston (Ian McShane), because, you know, RULES.

With less than an hour to find a way out of the extreme mess he’s gotten himself into, John calls in last two favors he has, with his first visit to woman who helped make him the Baba Yaga: The Director (Anjelica Huston), and the second to a woman who owes him via a blood marker: Sofia (Halle Berry).

Meanwhile, shit goes sideways for John’s friends, when The Adjudicator (the always fantastic Asia Kate Dillon) shows up: a chic master of High Table justice who delivers punishment to those that broke the rules by helping Wick out when he needed it the most. The Bowery King (Laurence Fishburne) and Winston are on the High Table’s shit list, and those people are not forgiving.

Once the grace period expires, assassins start jumping out of the crowd like crazy, and John Wick has to fight his way outta NYC on a goddamn horse (!!!), and then travel to Casablanca where we get to see him team up with Sofia and take out, oh I don’t know, at least a FEW HUNDRED men — with the help of her two amazing doggos.

The action is brutal and relentless (I haven’t seen this much blood spray since ever), and the sets are INSANE. You might ask why John ends up in an antique store full of guns and knives, and well – it should be obvious, right? Knife throwing LIKE WHOA, and listen, if John Wick ever invites you to an axe throwing contest I recommend you decline immediately.

But no matter how many men he takes out (I think this time mom said she lost count at 72), he still has to deal with the special sword-wielding assassins hired by The Adjudicator, a pack of John Wick fanboys (groupies are so annoying!) led by Zero (Mark Dacascos), a man who’s admiration for John is matched only by his desire to take him down.

You might also ask why The Continental has an entire room full of glass cases sheltering crystal skulls, and I will tell you it’s simply so they can be broken by John Wick’s body and it won’t matter that your brain is screaming “WTF?” during this sequence because the choreography of the fight is so exquisitely gorgeous you’ll be consumed by it.

Bottom line: Parabellum is a little clunkier and a little campier than the previous two films, but it’s still HELLA FUN and I will be happy watching Keanu do this until I die.

(And yes, a character does say the film’s title at one point, but since it’s Ian McShane I gotta let it slide because that dude is just too fucking smooth for me to ever be mad at him for anything).