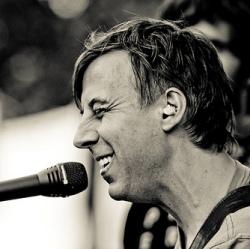 Monday afternoon at the KEXP Music Lounge during the Bumbershoot 2008 festival was THE place to be for awe-inspiring, intelligent, emotionally resonant modern rock music. Two Gallants had just earned a standing ovation and been ushered to the DJ booth for an interview by Rolling Stone correspondent Jonathan Zwickel as the comfy hidden venue was cleared for the next act, John Vanderslice, accompanied by North Carolina violinist Daniel Hart (of band Physics of Meaning).

"You're all here by invitation right?" Vanderslice joked before starting his wonderfully wistful, evocative set. "Usually we can't get into places like this." Vanderslice's musical narratives were sophisticated and funny, with lines like "I'll have my editors arrange for payment" jumping out from the sweet honey of his tumescent tunes. So many vivid images tumbled out of these melodic but never really mellow songs: A love of restlessness, a need for purpose, details about pots and pans and taped-over Krokus cassettes in hand-held recorders capturing sacred and terrible moments, hearts breaking as she goes to the ATM machine, Tarot decks with fateful cards, tinted windows.

I had never seen Vanderslice live before, and this succinct but somehow generous set made me want to go home and listen to all his records. It ended with he and Hart arousing the swooning audience to clap and stomp along with a final heartbreak number, as Vanderslice reminded us all that "the guy who stole your girlfriend from you in '75 is going to die." An intimate, endearing moment of beautiful music in the middle of the raging Seattle rock festival party surrounding it. 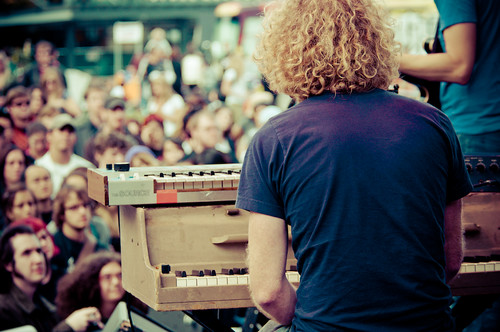