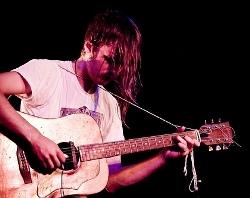 I missed the first couple of songs of Two Gallants' set at the KEXP Music Lounge, which started at 1:15 PM sharp in the dark and elegant venue during the third day of the Bumbershoot Festival. As a teaser for the upcoming 4:15 show for the general public on the Rockstar Energy Drink Stage, the bold, energetic folk-rock duo (Adam Stephens on vocals, guitar and Tyson Vogel on drums and occasional accompanying acoustic six string) didn't hold back a thing. By all accounts they gave the live in-studio KEXP fans a straight shot of their best, and simply did it all over again a mere few hours later.

Two Gallants have garnered a critical appreciation that has helped them transcend even the usual adoration of being a Saddle Creek band, and through four releases (three albums and a half) their frenzied drum-driven unique Americana has touched hearts outside of the usual indie and roots milieus. Blending crystalline relationship and political imagery with hooky, accessible songs amped by vocal tension and inspired percussion, their anthems and threnodies can feel both awesome and a little relentless in tone.

I admit to feeling a little wearied by the intensity of their early afternoon set until the slow-building, utterly captivating rendition of "Waves of Grain." With its images of "closets full of Bibles and guns," the American way of shooting its own wounded along with everyone else was made almost crippling-clear as Stephens and Vogel took its combination of "Masters of War" protest and "Desolation Row" description into the Faustian stratosphere. The standing ovation Two Gallants received afterwards did not feel forced, and neither did the depths of this, probably my favorite performance of Bumbershoot 2008.