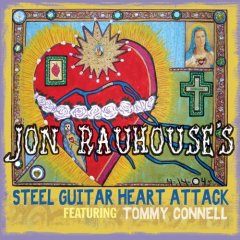 Excluding enthusiasts, an album consisting of purely guitar instrumentals can get old real fast. Even though I possess an amateur proficiency on the instrument and think that it has contributed as much to the world as, say, electricity, I must admit that I was a little skeptical of Jon Rauhouse’s Steel Guitar Heart Attack. Never hearing of Rauhouse before, I assumed that I was in for a few minutes of mild enjoyment followed by an hour of clock watching.

But I’ll be damned if I wasn’t proved terribly, tragically wrong.

Not only was a proved wrong, but I was also completely floored by Rauhouse’s quirky, vibrant, and downright masterpiece of an album. The repertoire covers everything from jazz, blues, country, and even the theme song from Mannix and the Andy Griffith Show. If this wasn’t good enough, Rauhouse called upon a myriad of sultry female vocalists to sing classical standards, including Visqueen frontwoman Rachel Flotard and frequent collaborator Neko Case, who delivers “East of the Sun” with a Fox Confessor-type of eerie siren sincerity.

While Rauhouse’s guitar is inspired, the album also features a line-up of phenomenal musicians. “Begin the Beguine” is a saucy, downbeat number complete with oboe and a 1930s legion hall horn section. And to showcase his versatility, the track is followed by “Holiday for Strings,” a snappy and expansive piece that would be the perfect radio song when riding shotgun with George Jetson (did his car even have a passenger’s seat?). Banjos float down “Hood Canal” while “Bongo Ride” features, well, bongos as the backdrop for Rauhouse’s slick guitar melody.

Why can’t there be more instrumental albums like this – records that feature such depth, diversity, and pure unfiltered fun? Steel Guitar Heart Attack is all over the place, without ever detaching fully from its core.

The title of the album comes from Rauhouse’s first hand experience with chest pains, emergency procedures, and angioplasty. And after hearing this album, everyone should thank Jon for powering through and sticking around.