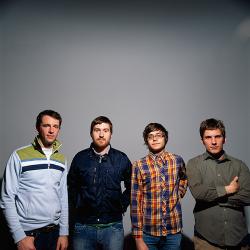 Friday’s Tapes 'n Tapes show at Neumo's was my fourth show in six days and I was beat. My ears hurt, I was tired, and I was having a harder time holding my drink with each successive show. That being said, there was no way I was going to miss Tapes 'n Tapes. I saw them play at The Hub on the UW campus back in November and it was a solid performance despite a less than enthusiastic crowd and a venue that was more suited for a junior high dance than a rock show. I thought that given the right environment they would really shine, and they did — part of the time, anyway.

TNT opened with “Just Drums” and the crowd cheered as the track's recognizable opening chords filled the air. It was just as garage-y as it is on the record and the bands energy level was high as they burned through the song and then moved into “The Iliad,” one of my favorite tracks from 2005’s The Loon. Anytime you can sneak in the lyrics “like a drunken pirate shipwreck” into a song and pair it with a damn catchy intro, you’ve got yourself a winner. Lead singer Josh Grier then announced that they were going to play an old song entitled “Beach Girl," which opened with “woo-hoo’s”; generally a good sign, but not all that remarkable here. The switch to “old songs” was short-lived, and after “Beach Girl” they went back to The Loon for “In Houston” and then a blistering rendition of “Ten Gallon Ascots.” At this point Grier announced that it was time for some new songs and the band launched into four fresh Tapes 'n Tapes ditties.

A band road-testing new songs and a band playing songs polished by experience and the recording process are two different animals. As time passes, band members become more and more adept at playing their respective parts and knowing how all the parts fit together to build a song. These new Tapes 'n Tapes tracks didn’t feel like they had all the kinks worked out yet. The band seemed disjointed and each song, although ripe with energy, fizzled on stage. After experimenting with these newer songs they went back to the bread and butter of The Loon, playing “Manitoba” and then later “Omaha.” These slower songs from The Loon were good, but lacking something. “Omaha” in particular just didn’t seem as sincere and earnest as it does on the record; it was good, no doubt, but it wasn’t what I hoped for. They closed the show with "Jakov’s Suite," and the song's braying overture leading into the sing-along chorus worked as well as a nightcap as it does as an album finale.

I left the show with the sinking feeling that Tapes 'n Tapes may have caught lighting in a bottle with The Loon. It’s an exceptional album and the songs off that record are terrific live. The one older song they played was lacking, and I don’t remember the songs from their debut EP wowing me when I saw them at the HUB either. The new songs lacked a clear identity and weren’t all that memorable. Hopefully I’ll be wrong and the next Tapes N Tapes record will be great (if not, we’ll at least have a damn fine song about pirate shipwrecks). Oh and by the way, you can get Tapes 'n Tapes on cassette at their merch table. Tapes N Tapes, cassettes. Get it? It’s clever.