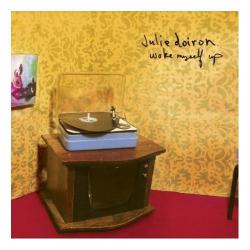 Julie Doiron’s EP Woke Myself Up is sweet and disarmingly intimate.  Doiron’s charming voice floats through songs of heartbreak, confusion, and regret, though these songs are not without a buoyant undercurrent of hope.  Woke Myself Up was recorded with the help of Doiron’s ex-bandmates of Eric’s Trip which resulted in an album that is interesting yet unobtrusive; Doiron’s gorgeous vocals are allowed to take center stage.  There is considerable range of musical styles on this album including, country, rock, and singer-songwriter style folk, yet the album feels pleasingly cohesive in sound and mood.

Amidst the darkly plucked electric guitar of “Swan Pond” Doiron sings “But to hold him and sing / may be just what I need.”  Hearing the words, you can’t help but accept them.  The lyrics are simple and straightforward, and with her no-nonsense, ingenuous delivery, you get the feeling that she means precisely what she says.

“I Left Town” is the album’s highlight.  It’s a little acoustic ditty about driving to be with a loved one.  Doiron’s sweetness and sincerity are so all consuming that when you hear a cat meow two minutes into the song you realize with sadness, wait a second, I’m not in Julie Doiron’s living room listening to hear sing me a song, that cat’s meow came through the speakers of my stereo, weird.  “Dark Horse” finds Doiron employing some country conventions and then subtly subverting them.  The song is propelled by a bouncing country bass-line and recalls much of fellow Canuck Neil Young’s work.  She uses a dark horse as a metaphor for the sad inevitability of change, and then to punctuate this idea sings, “Bye bye.”  The words manage to sound adorably childish and wise at the same time.

Not every song on this EP is absolutely jaw-dropping, but it is a solid listen all the way through.  The only major criticism I can level against Woke Myself Up is that you may feel like you’ve heard this one before.  This EP isn’t exactly a trailblazer.  But that’s ok, because that feeling is accompanied by a warm feeling of comfort and well being, because you’ve heard this one before, and you’ve always liked it.