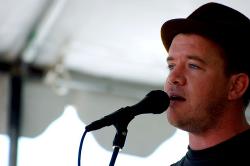 To paraphrase the timeless words of House of Love, I just don't know why I love the Cave Singers. Appalachian-style folk rock has never really topped my list of favorite musical genres; in fact, most blends of country-flavored songs don't generally top my playlists (though the number of exceptions has been growing of late). And yet, Seattle's Cave Singers have charmed me into submission. After hearing their forthcoming record and catching their set at Capitol Hill Block Party earlier this summer, I am a fan — a big one.

And the band's healthy gathering for Bumbershoot can attest that I'm not the only one. The band had scads of fans attend their early afternoon set, and their eerie yet catchy blend of folk rock, dark country, and indie rock, and gritty Americana was a crowd pleaser. Some people were dancing, a few were already singing along (even though their debut record hasn't officially released yet), and a sizeable number of crowd members were seated in chairs and appeared utterly rapt with the set.

The band was signed to the indie-llustrious Matador Records, and their first release, Invitation Songs, drops on September 25th. I, for one, am giddy about it!