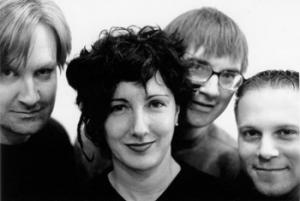 "Junior Citizen" by the Poster Children

I have no right whatsoever to think that the Poster Children and specifically this song has had a large effect on modern rock today.

Yet somehow, half of the songs I hear these days instantly make me think "Junior Citizen!" This seems wrong, considering most people haven't even heard the song. Heck, I only happened to hear the song because I was an obsessive nerd who taped MTV's 120 Minutes religiously each week (how I miss surly, surly Dave Kendall) and the song was on some random promo CD I got in a used CD bin for like 50 cents. This song has such a profound effect as a milemarker in my musical historical record that I can't help but think of the Poster Children when I review a surprisingly large amount of stuff released recently. Maybe it's the fusing of punk and electronic noises combined with a fairly flat, nasal voice (wow, if that doesn't sell the record, I don't know what will!) but "Junior Citizen" was out of place when it came out in the early 90's and still really hasn't found a proper temporal home. Sadly, even listening to the song now, I know that many more reviews will have me referring to Band X as "like the Poster Children".