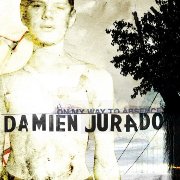 On My Way To Absence

The prolific, ubiquitous Damien Jurado has released over a half dozen completely fomented full-lengths, a smattering of stark, high quality mini-albums, an occasional bizarre experiment, in addition to numerous guest appearances on friends' records. He will also ruminate out loud to colleagues, friends and fans (all the same in his life, really) about doing garage-punk or dub or classic emo-core projects. Like a migrant worker in a new land trying to find personal success by working his ass off, his fruitful existence is plotted in a robust field of creative productivity.

After a shaky but inviting alternative folk-rock career start with 1997's Water Ave. S., Jurado streamlined his best qualities into his second Sub Pop album Rehearsals For Departure. This sophomore effort used stripped down and acoustic strumming to rid himself of psychic baggage accumulated by a ramshackle existence. With Ken Stringfellow to assist on strings, that album was mostly a deep, melancholy affair, allowing Jurado's voice to mature from its raw punk beginnings and gave the tales of poverty-stricken intoxicated woe perfectly suitable settings. Even one of the album's jauntier numbers like "Honey Baby" seemed classically parochial, a dualistically naïve and adulterous joyride through the heartland, of romance that could end in cold blood at any time.

But while many critics were rushing to place Jurado in a pantheon of previously lauded eclectic musicians (specifically Lou Reed and John Cale), as well as mentioning how his lyrics evinced the work of bohemian American writers (specifically John Fante and John Steinbeck), Jurado himself was cultivating the avant-garde material for Ghost of David. This effort was a braver, more abstracted album than anyone had expected. This is because Jurado's influences are far wider than they assume, and his instincts are to tweak as much on the metaphysical energy of Allen Ginsberg as embracing the hope-craving, bitter sentimentalism of Johnny Cash. Jurado's America is simply bigger than most other peoples'. It is the "old, weird America" that Greil Marcus wrote about — "the playground of God, Satan, tricksters, Puritans, confidence men, illuminati, braggarts, preachers, anonymous poets of all stripes," as Luc Sante wrote as a blurb for Marcus' Invisible Republic.

Jurado's latest album, On My Way To Absence, was released in April, 2005 and it is one of the best local albums of the year, arguably one of the best records of the year. His former accomplices make appearances again, and Jurado is as deeply immersed in their milieus as ever; never letting on that this is mostly just method acting. On My Way To Absence is Jurado and chief collaborator/guitarist Eric Fisher at their musical best. It features four months of their slaving away, with Fisher performing eloquently and passionately all over the thing, giving the listener plenty of room to breathe while the stories sink in. For followers of Jurado's career, think a combination of the gritty Where Shall You Take Me with the organic power pop of I Break Chairs.

The sublime "Night Out For The Downer" returns from an appearance on one of Jurado's experimental extended plays. It is a slow but mesmerizing track ("I'm a sinking ship tied to my lover's waist") that will also easily end up on a greatest hits (if that ever happens, considering Jurado's contrarian nature). That song comes right after the torching, crunching hard rock of "I Am The Mountain" and before the delicate traveling blues of "Northbound," showing how wide a palette Jurado has learned to work with.

I personally love how the album turns around "Fuel," a confessional song that could be the character another protagonist in a track called "Icicle" might be burning with slow but deliberate rage about. "Fuel" is about a Judas who finds only redemption in being burned ritualistically, someone who knows the harm he does and has no intention of ceasing it — the immolation is something the till-now-patient "Icicle" narrator would be only happy to do. The placement of both songs on a single disc is probably no accident, and neither are the polarity of the titles. "Icicle" is as ferocious and spiritually disturbing as Leonard Cohen's "Avalanche" or "Song Of Isaac," and along with the deceptively catchy but achingly desperate "Lion Tamer," make this possibly one of the finest records Jurado might ever create.

It's been a few months since the album was released, but if you're one of those who got a little tired keeping up with his astonishing output, don't let On My Way To Absence slip by you.