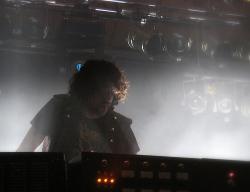 Ideologically, I’m of two minds when it comes to Justice.

I tend to agree with detractors of the French electronic duo who argue their album † has a lot of filler surrounded by a small handful of good singles. “D.A.N.C.E.,” “The Party,” and “DVNO” are great, catchy pop songs (although I suspect I’m in the minority in my appreciation of “The Party,” but I love the bratty vocals. They reminds me a lot of Robyn's voice). As a whole, though, † uses quite a few of the same beats and breaks and gets repetitive and tiring. It's also too beholden to the 4/4 beat to ever be innovative. I definitely believe the songs are best experienced in a club or, preferably, live.

Yet, my anti-rockist instincts kick into overdrive when I read an essay like the one that was included with the Village Voice’s Pazz and Jop survey this year. Written by Todd L. Burns, it’s called “Why We Love Justice (and Shouldn’t).” While I could easily spend hundreds of words debunking the article, Idolator’s Jess Harvell and Fluxblog’s Matthew Perpetua already tore it apart better than I could. Perpetua sums it up nicely:

I love dance music, and the dance music that I love is the real dance music. Many of my peers — and a fairly large number of ordinary music fans — love Justice, Simian Mobile Disco, and other contemporary musicians who make dance music, but that stuff can't possibly be real dance music because OH MY GOD YOU GUYS that music has a lot of hooks and shares some stylistic DNA with rock music! Ugh, rock music! Rock music is for total fucking idiots, and you can't possibly dance to that shit. Even though a great many people from around the world get happy and dance to music by Justice, you cannot actually dance to it because…..uh, I'm not going to explain that. YOU JUST CAN'T DANCE TO IT, OKAY? Everyone knows that it is im-fucking-possible to dance to music that has a strong beat and catchy bits! The dance music I like is pure and authentic, and you rock-loving motherfuckers will never understand it! Real dance music lacks hooks, vocals, novelty, dynamic shifts, and just kinda blends together into an amorphous blob of sound, and only special people such as myself can appreciate it.

That is a pretty condescending summary, but it is hardly unfair. Burns did say that critics who put † and/or Simian Mobile Disco’s excellent Attack Decay Sustain Release on their annual top 10 lists “should be ashamed of themselves.” Suffice to say, the essay is, from beginning to end, bullshit. Yet, the part that bothered me the most is where Burns wrote, “Justice and SMD live shows are rock shows—more suitable for headbanging than ass-shaking.”

Really? I’m sure we’re not going to the same Justice shows, but I live in Seattle, a city known for folded-arms and polite applause (a stereotype I help perpetuate, by the way) and I couldn’t help but draw a completely different opinion.

On Monday night, Justice found themselves back in Seattle to headline the MySpace Music Tour with MIA’s most famous collaborator Diplo opening. The show was sold out well in advance but, as The Stranger’s Eric Grandy also noted, it never felt uncomfortably packed. I thought they could have easily fit another 75-100 people in there before it would have been unreasonably full.

When I saw the duo at Neumo’s last fall, not a single extra person could have fit into the club with a crowbar. It didn’t help that it felt like a furnace in there (how many years have we been bitching about that?), but people wanted to dance; they just didn’t have the room. That wasn’t a problem for the crowd at the much larger Showbox Sodo. Burns’ essay had the subtitle “The perils of hyping dance music you can’t really dance to.” The very large crowd on Monday never read that you couldn’t dance to Justice. They were doing just fine, thank you very much. Yes, this was part of MySpace’s tour, so it wasn’t an indie rock crowd, per se. That was both a blessing (They aren’t quite as cynical about going to shows and genuinely seemed happy to be there. Some rave kids on ecstasy were a little too happy, but that’s another matter) and a curse (lord knows how many photos I almost interrupted on trips to and from the bar or restroom).

Watching Justice perform live it is easy to understanding where the hype comes from. They sound like a rock band, truth be told. They could form a rock band and play their songs in a rock club, like LCD Soundsystem does because they sample enough guitar songs and have a consistent beat. Live there were moments that were thrilling. Other times it was obvious how thin their catalogue (they frequently sampled their own songs throughout the night, and it felt forced at times. After the first few times of hearing samples from “D.A.N.C.E.” it just seemed manipulative (hey, there’s the hook from “D.AN.C.E.” – it must be time to you-know-what – which was one of the few legitimate points Burns made). At other times, they threw in some unexpected breaks and got the crowd to follow them wherever they wanted to go. Justice has the knack to understand their crowd and the hooks to keep them interested for more than an hour. Diplo, on the other hand, was also great but it seemed as though he felt frustrated throughout his set, saying “come on Seattle!” every ten minutes or so. I still saw quite a few people dancing, but this was clearly Justice’s audience. Well, Justice’s and MySpace’s.

I imagine most people were pleased with Justice’s set. I definitely was. They danced, they sang along to “We Are Your Friends” and seemed to, overall, have a great time. People love Justice, as they should and it is nothing to be ashamed of.