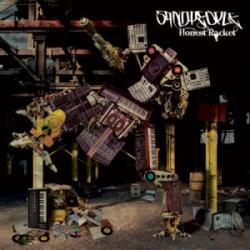 I was born and raised in Texas. The rap/hip hop bred out of Texas and the deep south is a bit of a different animal than west or east coast hip hop. It's grimy, dirty, nasty, chopped and screwed, slow and throwed – all referring to a way of remixing hip hop that is applied by slowing the tempo, skipping beats, stop-time and scratching. The hip hop of the Northwest has a cleaner, more politically left, fresh style but often incorporates elements of other hip hop styles, like dirty south and east coast rap.

Subscribing to the mantra of making quality music that is relevant to real everyday life, Portland-based Sandpeople aren't afraid to mix it up on Honest Racket, their newest release. Sandpeople consist of several sub-groups enmeshed into a larger collective, and workinterchangeably on this most recent effort. Featuring The Grouch, of Living Legends, "Real Estate" is backed by driving beats and almost Busta-style vocals and is one of the most standout tracks on this album. It flows well enough but grit is left out of the equation and I'm left wanting. "Sandman" listens like a Northwest (read: watered down) version of dirty south screw, while "Lose It" seems to be reaching for more of the Kanye style of catchy self-indulgent lyrics over bare beats.

Redeeming with an underlying funk-inspired organ track and jazzy hi-hat drumming, "Group Home" kills as one of the strongest tracks on Honest Racket. And approaching a topic not usually broached by hip hop music at all, "All In Your Head" quips "Who cares if two gays wanna tie the knot? If you ain't gay then why does this preoccupy your thoughts?" Honest Racket feels somewhat muddled throughout, possibly the consequence of a somewhat disjointed 11 man crew. With nine MCs and two DJs, Sandpeople miracously maintain a consistent sound and steady groove.

Sandpeople's talent and enthusiasm are apparent, and there are rough gems sprinkled throughout Honest Racket. I'll be looking forward to future releases, curious to hear how this group of mixmatched DJs and MCs meld their influences and styles into an even more tight knit album of work.